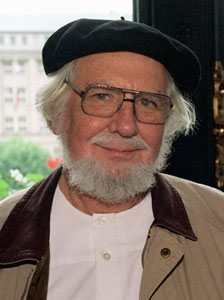 The Rev. Ernesto Cardenal, one of Latin America’s most admired poets and priests, who defied the Roman Catholic Church in the 1980s by serving in the revolutionary Sandinista government of Nicaragua, died on Sunday in Managua, Nicaragua. He was 95.

His personal assistant, Luz Marina Acosta, confirmed his death to The Associated Press.

Born to a wealthy Nicaraguan family, Father Cardenal became a prominent intellectual voice of the Nicaraguan revolution and an ardent proponent of liberation theology, a Christian movement rooted in Marxist principles and committed to social justice and uplifting the poor. He was appointed Nicaragua’s first minister of culture after the Sandinistas overthrew the dictator Gen. Anastasio Somoza Debayle in 1979. 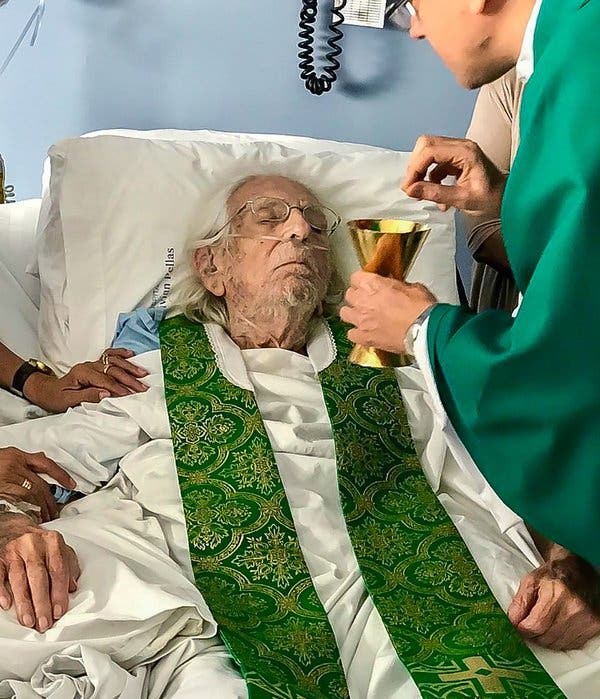 As the Vatican’s opposition to liberation theology intensified in the 1980s under Pope John Paul II, Father Cardenal became a focal point. Before a scheduled visit to Nicaragua in 1983, the pope publicly demanded that Father Cardenal and four other priests who had actively supported the revolution resign their government positions. The Sandinista government refused the demand to replace them, but said its invitation to the pope still stood.

After months of public arguing, the pope accepted the invitation and landed in Managua, Nicaragua’s capital. As he walked along a receiving line on the tarmac shaking hands, the pope seemed taken aback to see Father Cardenal among the dignitaries.

While other priests were in clerical garb, Father Cardenal had shown up wearing a collarless white shirt, slacks and his signature black beret over his thick white hair. When he knelt to kiss the pope’s ring, the pope withheld his hand and wagged his finger at him as he spoke to him, apparently sternly. According to a Vatican official, the pope told Father Cardenal, “You must straighten out your position with the church,” The Associated Press reported.

Videotape of the scolding, though not audible, was broadcast around the world. 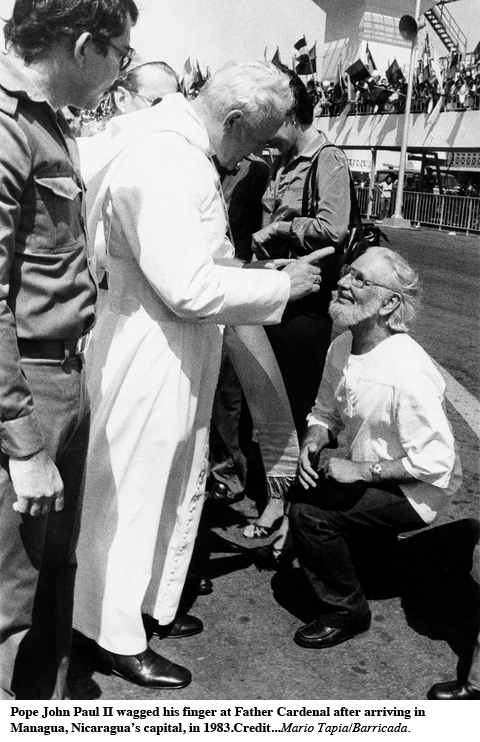 “Christ led me to Marx,” Father Cardenal said in an interview in 1984. “I don’t think the pope understands Marxism. For me, the four gospels are all equally communist. I’m a Marxist who believes in God, follows Christ, and is a revolutionary for the sake of his kingdom.”

His priestly authority was revoked by Nicaragua’s bishops that same year. (Three other priests were also disciplined.) Father Cardenal’s suspension was lifted in February 2019, when Pope Francis granted him absolution from “all canonical censorships,” the Vatican News reported.

Father Cardenal began writing poetry as a young man, tracing the tormented history of Nicaragua and Latin America as epics in blank verse.

Much of his poetry, though, was intimate: love poems that recalled the longings of his youth, finely wrought images of city lights at dusk or his famous “Prayer for Marilyn Monroe,” in which he describes how Monroe was found on her deathbed in 1962, “like someone wounded by gangsters/stretching out his hand to a disconnected telephone.”

Fascinated by evolution and its lessons for politics, Father Cardenal began to incorporate science into his poetry in the 1980s. He developed the theme until the end of his life, marveling at the origins of the universe and the mysteries of DNA — sources of awe that in his vision brought people closer to God.

“In this monumental vision, everything merges and condenses,” the Nicaraguan writer Sergio Ramírez wrote in the introduction to Father Cardenal’s anthology “Ninety at Ninety,” which was published in Spanish in 2014. “Not only do the poet’s intimate personal experience and the scientific exploration of the heavens enter into the mystical, so do the memories of his own past.”

The most recent complete collection of Father Cardenal’s poetry published in English was “Pluriverse: New and Selected Poems,” (2009, edited and translated in part by Jonathan Cohen).

Closing the volume was the poem “Stardust,” Father Cardenal’s meditation on death. It concludes:

And the galaxy was taking the shape of a flower

the way it looks now on a starry night.

Our flesh and our bones come from other stars

and perhaps even from other galaxies,

and after death we will help to form other stars

Editors’ Picks and other galaxies.

We come from the stars, and to them we shall return.

Father Cardenal reading from his book of poems in 1980. Credit…Lachmann/Ullstein Bild, via Getty Images

Ernesto Cardenal Martínez was born on Jan. 20, 1925, to an upper-class family in Granada, a city on Lake Nicaragua. He studied literature in Managua and at Columbia University in New York City, where he read Walt Whitman, Emily Dickinson and Ezra Pound.

He returned to Nicaragua in the 1950s, but after a failed coup against the Somoza family, he fled and joined the Trappist monastery Gethsemani, in Kentucky, where he befriended the American monk and writer Thomas Merton. He was ordained a priest after his subsequent return to Nicaragua.

Father Cardenal was an early supporter of the Sandinista National Liberation Front, which was founded in the early 1960s, named after Augusto César Sandino, the revolutionary who had led a guerrilla campaign against the American occupation of Nicaragua in the 1920s and ’30s and was assassinated in 1934.

Father Cardenal furthered the cause after settling on an island in the Solentiname archipelago, in vast Lake Nicaragua near the southern border, in the 1960s. He built a chapel, founded an artists colony, and taught literature and painting to local residents.

His poetry began to gain recognition. He became known for what he called his “Epigrams” — lyrical bursts about love and longing mixed with political and social commentary against the Somoza regime. In one, he wrote:

yelling: VIVA LA LIBERTAD! In the middle of the street

I participated in the April rebellion:

but I grow pale when I pass by your house

and one look from you makes me tremble.

His sermons, too, were political, full of denunciations of the Somoza regime. Some of his young parishioners became “guerrilleros,” and the island became a central military training ground for the Sandinista movement. After the Sandinistas came to power in 1979, after a bloody period of rioting, guerrilla resistance and a mass kidnapping operation in the capital, Father Cardenal was named minister of culture by the junta leader, Daniel Ortega.

As a government minister, Father Cardenal sought what he called the “democratization of culture.” He created poetry workshops around the country, tapping into Nicaragua’s rich poetic tradition, embodied in part by Ruben Dario, who spearheaded a Latin American modernist literary movement in the late 19th century.

But Father Cardenal’s critics said the ministry was imposing ideological uniformity by pressuring new writers to produce propaganda, particularly during the Sandinistas’ long guerrilla war against an American-backed counterrevolutionary force, known as the contras.

No immediate family members survive. His brother, the Rev. Fernando Cardenal, died in 2016.

Father Cardenal remained culture minister until 1987, when the ministry was dissolved and merged with another government agency. In the 1990s he distanced himself from the Sandinista government and in recent years criticized what he called the increasingly authoritarian style of Mr. Ortega, who became president in 2007. For Father Cardenal, the Sandinista revolution had failed.

But he remained committed to his Marxist ideals.

“I am a revolutionary,” Father Cardenal said in an interview with The New York Times published in January 2015. “Revolutionary means that I want to change the world.”

Reported by The New York Times.

March 2, 2020 by admin Comments are off 0 viewson Frontpage