Evo Morales resigns from the presidency of Bolivia 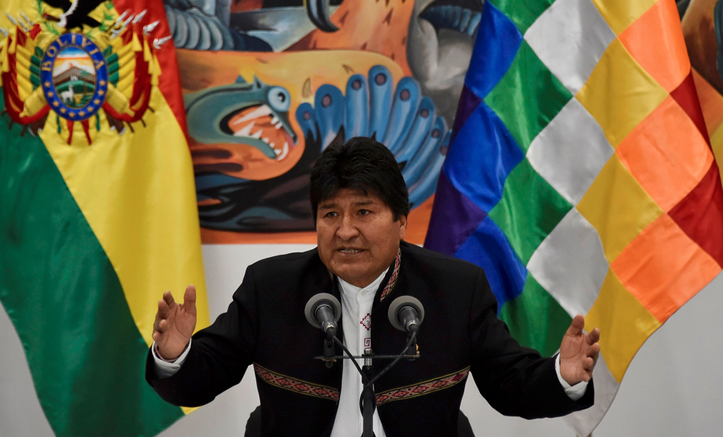 The president of Bolivia, Evo Morales, announced on Sunday his resignation after almost 14 years in power and in the midst of the deep crisis unleashed by allegations of fraud in the elections of last Oct. 20.

“There has been a civic, political and police coup,” the president said in announcing his resignation in a televised statement and with his vice president, Álvaro García Linera. “My sin is being an indigenous, union leader and cocalero.

Morales justified his resignation to avoid continuing violence in the country after three weeks of clashes between his supporters and his detractors that have left at least three dead and hundreds injured.

García Linera announced that he also resigned from office. “The coup has been consummated,” said the vice president.

“We will comply with Tupac Katari’s sentence, we will return and we will be millions,” he warned.

The announcement of the resignation came hours after the commander of the Bolivian Armed Forces, General Williams Kaliman, suggested that the president take a step to the side to unlock the political crisis.

The military saw insufficient the call for new elections that the government had made in the morning hours after the “irregularities” detected by an audit of the elections made by the Organization of American States (OAS).

Days before, numerous police units had declared a “riot” in protest against the government.

The problems of Morales began on the same night of the elections, when the Supreme Electoral Tribunal (TSE) suspended by surprise the rapid count with 83 percent scrutinized and with a tendency that indicated that there would be a second round between the Bolivian president with the opposition candidate Carlos Mesa.

The next day, that fast count called Fast Transmission of Preliminary Results (TREP) was reactivated with a 95 percent advance and with Morales winning in the first round by a narrow margin.

Suspicions raised by the strange movements of the TSE led the opposition to claim a “shameless fraud.” Even the observation missions of the OAS and the European Union called for a second round.

But Morales insisted that he had won the elections and, in response to opposition demonstrations, called on his followers to “defend democracy” in the streets and stop a “coup d’etat.”

He also accepted that the OAS conduct an audit of the scrutiny. But the protests continued, the opposition suspected the OAS.

In its report, the OAS denounced “irregularities” and determined that it was statistically unlikely that Morales had won by the 10 percent margin he needed to avoid a second election round.

The international body’s audit also found physical records with alterations and forged signatures. The 13-page report states that in many cases the chain of custody of the minutes was not respected and that there was manipulation of the computer system.

Morales responded by calling for new elections and announcing the renewal of all members of the Supreme Electoral Tribunal, who were heavily criticized for the handling of last month’s count. Something also recommended by the OAS.

But that did not calm the opposition protests. The president of the Santa Cruz Civic Committee, Luis Fernando Camacho, responded by demanding the resignation of all senior officials and leaving the government to a “board of notables” to manage the transition. (Source: BBC World).

November 10, 2019 by admin Comments are off 0 viewson Frontpage