Warrants issued for soldiers, police in connection with Ayotzinapa case 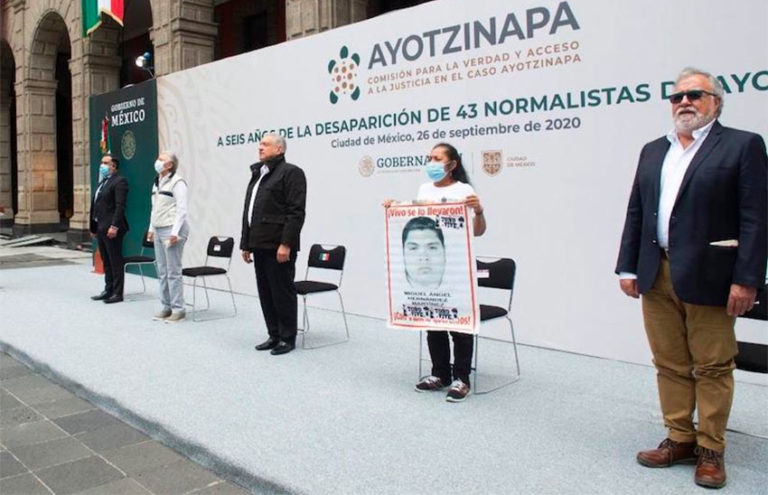 Those responsible in the case of 43 missing students have been identified: attorney general

For the first time, arrest warrants have been issued against soldiers and federal police in connection with the disappearance and presumed murder of 43 students in Guerrero in 2014.

The Attorney General’s Office (FGR) announced Saturday – the sixth anniversary of the Ayotzinapa rural teachers college students’ disappearance in Iguala – that 25 new warrants had been issued for the arrest of people who participated in and/or knew about the abduction.

Attorney General Alejandro Gertz Manero said that “those responsible for the forced disappearance of the 43 students … are fully identified” and will be prosecuted.

In an address to parents of the missing students at an event on Saturday, President López Obrador also spoke of the arrest warrants against soldiers and police.

“He who participated and it is proven will be tried, this is an advance, there will be no cover-up,” he said.

“The truth, the authentic truth, has to be known. That’s the commitment,” López Obrador said, pledging that there will be zero impunity in the case.

He called on judges to act with rectitude and not release suspects, many of whom have already been set free.

“We need the judges to help to advance [in the case]. There are a lot of problems in the judicial branch, they release suspected culprits for any reason,” López Obrador said.

According to the previous government’s official version of events – the so-called “historic truth” – the students, who had commandeered buses to travel to a protest march in Mexico City, were intercepted by corrupt municipal police who handed them over to a local gang, the Guerreros Unidos.

Gang members then killed the students, burned their bodies in a dump in the municipality of Cocula and disposed of their remains in a nearby river, according to the version of events presented by former attorney general Jesús Murillo Karam in January 2015.

But the “historic truth” was widely questioned and rejected by the current government, which established a truth commission and launched a new investigation into the case.

The army has long been suspected of being involved in the students’ disappearance and parents of the victims have demanded it be investigated.

There is a large army base near where the students were abducted and independent investigations have found that members of the military were aware of the events of September 26, 2014. One theory is that the students’ bodies were burned in army incinerators after they were killed.

Omar Gómez Trejo, the special prosecutor in charge of the reexamination of the case, said that among the suspects currently being sought are “the intellectual and material authors of the disappearance.”

“These orders [arrest warrants] include police from various municipalities, federal police [and] members of the army,” he said.

Gómez said that current and former officials with the FGR and members of organized crime groups are also being sought. He didn’t reveal whether Murillo Karam was one of the officials authorities are seeking to arrest.

The motive for the students’ abduction and presumed murder has not been definitively established by the current government but Gertz Manero, who said earlier this year that the “historic truth” is over, said Saturday that the students were “victims who ended up in the middle of a battle of interests between drug trafficking forces.”

They were allegedly mistaken for members of a rival gang, Los Rojos, and there have been reports that there were drugs on the bus they commandeered. Heroin made with opium poppies grown in Guerrero has long been transported through Iguala en route to the United States.

Gertz Manero said the Ayotzinapa students were not the only people to have been killed in Iguala on the night of September 26.

“Nearly 80 people were massacred and hidden in Iguala by the different criminal groups and their official accomplices,” he said.

Of the 43 students who were presumably killed, the remains of just three have been found and identified.

One former official being sought by authorities is Tomás Zerón, who was head of the now-defunct Criminal Investigation Agency at the time of the students’ disappearance.

A warrant has been issued for his arrests on charges of torture – many suspects were found to have been tortured and were released from custody as a result – and covering up forced disappearances.

Gertz Manero said Saturday that Zerón was in Israel and that the Mexican government has asked Israeli authorities for help to arrest him.

The attorney general also accused Zerón of stealing more than 1 billion pesos (US $44.3 million at today’s exchange rate) from the budget of the PGR, the FGR’s predecessor.

“Last year, when we started this investigation and discovered this enormous embezzlement, this individual fled the country,” Gertz Manero said, adding that after authorities obtained a warrant for his arrest they lodged an application for his extradition with Canadian authorities.

“But he immediately fled to Israel, a country which has been asked for its complete support. … Its authorities know very well what human rights violations mean and the responsibilities that executioners and torturers [must face],” he said.

Gertz Manero asserted that the previous government was “deeply infiltrated by crime and corruption” and that Murillo Karam was involved in the cover-up of the Ayotzinapa case.

Gómez said that Zerón must face justice and reveal why he did what he did. He said that a total of 70 arrest warrants have been issued in connection with the students’ disappearance. One Federal Police officer is already in custody, he said.

Former Iguala mayor José Luis Abarca and his wife, María de los Ángeles Pineda Villa – who have been accused of being the masterminds of the students’ abduction and complicit with the Guerreros Unidos – are also awaiting trial in prison as are at least two municipal security officials.