UN commission expresses alarm over US ‘expulsion flights’ of migrants 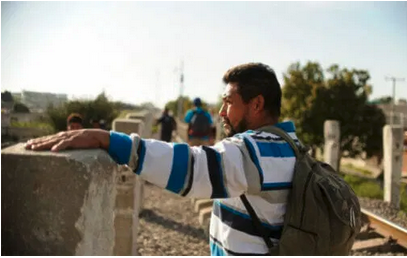 The US policy violates the 1951 Refugee Convention, says spokesman

by the El Reportero news services

The United Nations has rebuked the U.S. government for deporting migrants under the pretext of Covid-19 legislation — the Title 42 order — that allows for the rapid expulsion of border arrivals.

The Biden administration has been sending Central American migrants by plane to southern Mexico after denying them access to protection screening and U.S. asylum procedures, a tenet of international refugee law, according to the the United Nations High Commissioner for Refugees (UNHCR).

The Title 42 order was introduced by the Trump administration, but has been continued since Joe Biden took office in January.

The UN has warned that the practice will test the “already overloaded humanitarian response capacity” in southern Mexico and northern Guatemala, and could raise the risk of the spread of Covid-19 at the borders at a time when Mexico is experiencing a third wave of the pandemic.

Both the U.S. and Mexico have experienced unprecedented arrivals of migrants in recent months. The U.S. has recorded 1.2 million arrests of illegal migrants since last October, while Mexico recorded that in the first seven months of 2021 when it received a record 64,378 asylum applications, according to Comar, the Mexican refugee agency.

UNHCR representative to the U.S. and the Caribbean, Matthew Reynolds, voiced his concerns. “These expulsion flights of non-Mexicans to the deep interior of Mexico constitute a troubling new dimension in enforcement of the Covid related public health,” he said.

He added that the strategy was in contravention of international law and the humanitarian principles of the 1951 Refugee Convention. “All governments have the obligation to uphold these laws and principles at all times,” he said.

Reynolds added that risks associated with Covid-19 were no barrier to operating an effective and safe system for processing migrants. “Even where Covid-19 has surged at times, many countries have put in place effective protocols such as systematic health screenings, testing and quarantine measures that have simultaneously and successfully protected both public health and the human right to seek asylum,” he said.

In Mexico, a collective of migrant advocacy groups condemned what they called a new accord between Mexico and the U.S. and insisted that the government meet its obligation to guarantee the right to request asylum.

The collective said the first “expulsion flight” left McAllen, Texas, on Monday for Tapachula, Chiapas, where its passengers were then transferred across the border to Talismán, Guatemala, by immigration agents and National Guardsmen.

The U.S. and Mexico have undertaken a flurry of bilateral dialogue on the migrant issue this week. The president spoke with U.S. Vice President Kamala Harris by telephone on Monday, and delegations from the two countries met on Tuesday, where migration and cooperation on Central America were discussed. The president subsequently announced that President Biden would be invited to Mexico in late September.

However, past U.S. rhetoric on migration has left little room for dialogue. During a visit to Guatemala in June to address the root causes of migration, Harris addressed would-be migrants with a simple message: “Do not come.”

With reports from El País and Proceso