Tollan, the city ruled by Quetzalcóatl 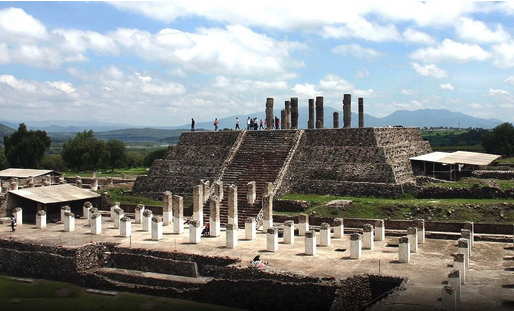 Tollan was a city in pre-Hispanic Mexico, located in the current city of Tula, Hidalgo. It is said that it was ruled by Quetzalcóatl

Of all the cities of pre-Hispanic Mexico, it is difficult to find one that has had the fame of Tollan. According to Mesoamerican mythology, Tollan was the city founded and ruled by Quetzalcóatl.

Where is Tollan located?

Recent archaeological investigations have confirmed that Tollan is located in the city of Tula Hidalgo. Tollan was a city of around 15 km2 that had great economic and social complexity.

Tollan can be translated as “place where tules abound” in Nahuatl. Bernardino de Sahagún, missionary and author of some of the most important documents for the investigation of Mexico prior to the colony, called Tula “Tollan Xicocotitlan”, which means Tula together with Xicococ. There is near the city of Tula, the famous Jicuco hill, which we could interpret as proof that Tollan is actually the current city of Tula.

Why is it said that Quetzalcóatl ruled it?

According to Mesoamerican mythology, Quetzalcóatl was born between the 9th and 10th centuries after Christ, near Xochicalco, in the current state of Morelos. As an adult he took revenge for the murder of his father and claimed his inheritance as king of the Toltecs. After this, he founded Tollan and began a new era of prosperity for the Toltec civilization. This continued until the war between the people of Quetzalcóatl and the followers of Tezcatlipoca, the god of war and human sacrifice. Quetzalcóatl and his followers were defeated and exiled from Tollan.

During the 1940s, Jorge Acosta and Hugo Moedano, anthropologists, rescued hundreds of sculptures from the city of Tula. Within these, representations of characters from the history of pre-Hispanic Mexico stood out. It was not until the 1980s that a research project led by Roberto Gallegos recovered a fragment of a pilaster from one of the Tollan pyramids, which contained the image of Quetzalcóatl.

Another figure found in the place was that of the god Tezcatlipoca; this is the oldest sculpture of this deity found in the central highlands. The remains mentioned here, found in such close proximity to each other, would represent a great advance for the knowledge that we have today of the Mesoamerican peoples.

June 20, 2021 by admin Comments are off 0 viewson Arts & Entertainment