Threats reported after returning to classes at City College 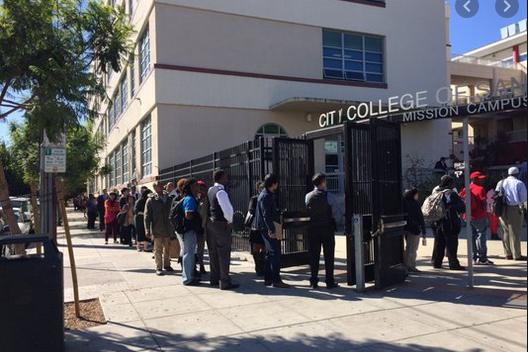 San Francisco City College students and teachers denounced the threats and challenges they face with returning to school remotely for the fall 2020 semester due to the pandemic.

During a press conference, they questioned why if City College of San Francisco is key to getting back to work in a post-pandemic economy, the administration and Board of Trustees is making decisions to reduce and destroy it.

“Why in this age of the Black Lives Matter movement are they weakening the Department of Black Studies? Why in times of a global pandemic are 60 percent of teachers of English as a Second Language fired, leaving immigrant students without the resources to integrate into the economy?” they questioned.

But that was not all. They also demanded to know why in this time of the affordable housing crisis they ignored protecting the interests of the college on land that City College has used since 1946.

Malaika Finkelstein, president of the AFT 2121 union, asked the administration not to use the pandemic as an excuse to cut classes for the already suffering young people.

And she said that the rumors that the rectors and heads of departments have ordered to cut classes with less than 10 students, have been confirmed. Nor is there a tuition plan, she lamented, that takes into account the global pandemic and the economic crisis that students and the community face.

“Students and school employees are struggling to find health and child care, financial security, and how to deal with the crisis. We must be there for them. Leave classes open and give them time to sign up,” the union leader said in a letter to City College councilors and Chancellor Rajen Vurdien.

“We have to keep classes open, and fulfill our mission in times of crisis. Our community needs us more than ever. We are critical to the recovery of San Francisco,” she said.

More than a dozen librarians who recently received notices of layoffs or cuts in their hours during the fall semester urged City College administration and counselors to reconsider their decision.

The reasons for the fall layoffs are that libraries are closed and librarians do not serve students in person.

“This confirms to us that much of our valuable work is not seen. Since the school closed in March, the adjunct librarians have answered questions via our chat service 24 hours a day, 7 days a week, we classify online workshops with individual comments, we offer research workshops via Zoom and we give individual follow-up to students,” they said when listing the series of activities they have carried out while working from home.

Kelvin Ming Young, head of the Aging Department (OLAD), lamented that the College’s administration canceled more than 90 percent of their original schedule and left them with only five classes for the semester.

“Senior programs at San Francisco City College are among the first of their kind in the nation. They are essential services for the health and physical and mental well-being of the adults of our community through a variety of courses such as art, music, theater, literature, yoga, Tai Chi, mind and body health”.

He added that without this robust and comprehensive program, many of his adult students will face isolation, loneliness, anxiety, depression, and physical injury.

“Now more than ever as COVID-19 continues to cause harm, we must maintain our program and classes to serve the adult residents of San Francisco.”

In an open letter addressed to the City College Board by 60 English as a Second Language (ESL) assistant teachers who were suddenly laid off this spring, they said they understand that tough decisions are needed given the nature of the current crisis.

However, they stated that COVID-19 should not serve as a scapegoat for the continued mismatch of the school’s goals with the administrative actions that are taken behind closed doors.

“Our students are the hardest hit, while they lose their classes, teachers lose jobs and students we love,” they indicated.

And they called for a change for greater transparency and communication of the present administration even towards the Board of Directors.

“We demand a change of direction from our city, our students and ourselves.”

On the other hand, they also protested against the vote of the San Francisco Board of Supervisors that approved the development of a housing project on the site where the Balboa Dam was planned 100 years ago next to San Francisco City College.

The Balboa Dam was designed to fill with water to a depth of 25 feet. But it was never used, and it was left as an empty space that is currently used as a parking lot by San Francisco City College without being its property.

But the place belongs to the City of San Francisco; the president of the Board of Supervisors, Norman Yee wants houses to be built there, and he already has a project to build 1,100 new houses, 50 percent would be for essential workers supposedly to affordable prices.

It is also planned to dedicate 150 units for City College staff and faculty.

San Francisco Mayor London Breed said around the project that San Francisco is in the midst of a housing shortage and they need to build more houses across the city.

“The Balboa Dam project will create more than 1,000 new homes for families, workers, and teachers, while also providing the necessary childcare facilities and open spaces,” he said in a statement.

However, dozens of community members and organizations such as CCSF4All, Our City SF, Richmond District Rising, and Defend City College Alliance among many others said that this project will cause significant damage to City College and the surrounding neighborhoods as it will make access impossible for many and very difficult for others; it will create problems with public transportation, traffic congestion and safety.

“This valuable public land should not be privatized. It should be kept in public hands and used for a project that is 100 percent accessible that meets the growing need for affordable housing, not market rates, and at the same time that it protects the City College”.

However, dozens of community members and organizations such as CCSF4All, Our City SF, Richmond District Rising, and Defend City College Alliance among many others, said that this project will cause significant damage to City College and surrounding neighborhoods by doing the access impossible for many and very difficult for others; it will create problems with public transportation, traffic congestion and safety.

“This valuable public land should not be privatized. It should be kept in public hands and used for a project that is 100 percent accessible; that meets the growing need for affordable housing, not market rates; and at the same time that it protects the City College.

August 15, 2020 by admin Comments are off 0 viewson Frontpage