There is not much to celebrate for Native Americans on Thanksgiving

For updating purposes, this article will come out one day after Thanksgiving, so I say I hope you had a wonderful family reunion in the middle of a delicious dinner in peace and love. This article, written by David J. Silverman, describes what history has forgotten to emphasize about this holiday. I hope you enjoy it. – Marvin Ramírez.

The mythical harmony of the First Thanksgiving taught in school is the most obvious offense against history. After that, it just gets worse

While I have been researching and writing a Wampanoag-centered history of Plymouth Colony and the Thanksgiving holiday, my conversations with Native people have opened my eyes to some profound lessons about their past and present. These teachings have particular resonance this Thanksgiving season as the United States continues to struggle with white nationalism, the importance of distinguishing between truth and lies in democratic debate, and the place of indigenous people in a pluralistic country with a colonial foundation. 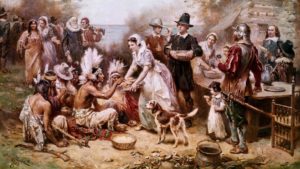 Native people widely agree that the U.S. has yet to reckon with its history of white violence against their people. Instead, the country uses the myth of the First Thanksgiving to make it appear that Indians consented bloodlessly to colonialism.

That myth, reinforced over and over again through grade school Thanksgiving pageants, holiday decorations, and television specials, is the only cameo Indians make in the colonial history curriculum in many American schools. Unfortunately, it is terrible history and even worse civics.

The myth tells that supposedly friendly Indians (rarely identified by tribe) voluntarily gifted their country to the Pilgrims in order to lay the foundations for a white, Christian, democratic United States. As for why these Indians were so welcoming in the first place, this myth has nothing to say. It does not address the fact that the Wampanoags had already experienced years of slave raiding by European sailors before the appearance of the Mayflower, and that those contacts had introduced them to a devastating plague that more than halved their population and left them vulnerable to their inter-tribal enemies. Thus, when the Pilgrims arrived, the Wampanoags looked to them for a military alliance despite their wariness of English treachery.

The Thanksgiving Myth also evades the fact that the celebrated peace between the Wampanoags and Plymouth was rife with tensions from the start and ultimately degenerated into a bloody war. During the celebrated 50 years of peace following the First Thanksgiving, the Wampanoags complained endlessly about the English encroaching on their land, undermining their political systems, and asserting their jurisdiction over purely Indian affairs.

Not coincidentally, there were recurrent war scares during these years as Native leaders reached across tribal lines to make common cause against their common colonial threat. The tension finally broke in King Philip’s War of 1675-76, which led to the deaths of thousands of Wampanoag, Narragansett, Nipmuc, and other indigenous people, and the enslavement of thousands more. The Thanksgiving Myth ignores this consequence of the Pilgrim-Wampanoag alliance, though clashes of this sort were a basic feature of American colonial history.

Some American history courses might teach about King Philip’s War, but few have anything to say about how many Wampanoags and other Native New Englanders survived after their military subjugation. Over the following centuries, they endured white society’s reduction of them and their children to indentured servitude and the ongoing occupation of their lands. They also suffered white people denying they were Indians at all based on the intermarriages and cultural adjustments they had made to survive under white domination. In other words, Americans are rarely taught the incredible achievement that American Indians are still here, every bit as much a part of the modern world as everyone else.

Indigenous people also widely bemoan that Americans’ lack of historical understanding about the Native American contributes to a marked lack of recognition of their place in the country, a general lack of compassion for their historic struggles, and widespread unawareness about their ongoing fights for sovereignty and cultural self-determination. Indeed, many of them feel invisible to the general public.

Lest we diminish the impact of these messages, consider the experience of a young Wampanoag woman who told me that when she was in kindergarten, the lone Indian in her class, her teacher cast her as Chief Massasoit in a Thanksgiving pageant and had her sing with her classmates “This Land is Your Land, This Land is My Land.” Reflecting on the moment as an adult, the cruel irony was not lost on her. As a child, she only knew enough to be embarrassed about it.

Not least of all, the widespread belief that modern Indians cannot be authentic and have no legitimate historic rights has contributed to a recent decision by Trump’s Department of the Interior to revoke a 2007 federal ruling that restored reservation lands to the Mashpee Wampanoags of Cape Cod, descendants of the very people who welcomed the Pilgrims.

No wonder, then, that many Native people, including the Wampanoags, charge that their fellow Americans lack sufficient gratitude for what they’ve sacrificed for the country. This feeling of victimhood is especially poignant given that many Native communities still suffer extraordinarily high levels of poverty, with all of its associated ills, while living in the shadow of sometimes garish wealth. Wampanoag people in southeastern New England, for instance, are confronted daily with the sight of outsiders’ extravagant coastal estates, occupied for only six or eight weeks in summer, built atop places where the ancestors are buried and where some of them fished, hunted, and gathered within memory. The image sickens and depresses. And yet there is no escaping it or the sense that other Americans revel in it.

In Thanksgiving season, one cannot drive past neighbors’ lawns or go to the store without confronting happy Pilgrim and Indian decorations, or turn on the television, radio, or computer without being bombarded with Pilgrim and Indian themes. Some schools continue to have children, including Native children, perform Thanksgiving pageants. For these reasons and more, the United New England Indians have held a National Day of Mourning in Plymouth every Thanksgiving Day since 1970, which is attended by indigenous people from throughout the hemisphere. They do not see American colonialism as something to celebrate.

Part of what I’ve learned through my conversations with Wampanoag people is that achieving some measure of repair and signaling that Americans value their Native countrymen and women requires compassion, gratitude, and a willingness to confront uncomfortable history. Taking these steps might also help us, collectively, to restore basic dignity, intelligence, and humanity to our civic culture.

December 14, 2019 by admin Comments are off 0 viewson Editorial