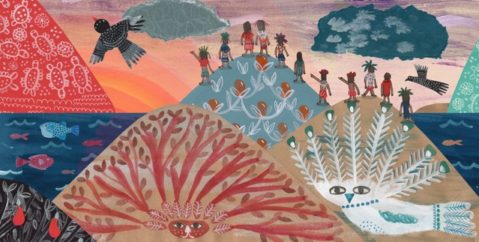 Book enables modern readers to connect to an ancient story

When Ilan Stavans first learned about the Popol Vuh as a teenager growing up in Mexico City, he was fascinated by the millennia-old Mayan tale. Decades later, Stavans reconnected with the text and saw it as comparable to other foundational narratives from world civilizations, such as the Bible. Yet he noted a key difference: unlike these classics, the Popol Vuh had remained obscure.

Now Stavans — an acclaimed scholar of the humanities, Latin America and Latino culture at Amherst College — is helping modern readers connect to the ancient story that began as an oral tradition among the K’iche people, who are part of the Maya.

Stavans has released Popol Vuh: A Retelling, a book-length version of the narrative that he hopes will interest a mainstream audience. The book features illustrations from Salvadoran artist Gabriela Larios, whose artwork provides a crucial dimension, Stavans said, as does the foreword by Homero Aridjis, Mexico’s former ambassador to UNESCO.

“My intent in this retelling was to insert the Popol Vuh into the canon of world classics, sagas that represent the birth and development of a nation,” Stavans said. “I have always been puzzled by the total absence of pre-Columbian indigenous aboriginal narratives that tell the story of the various peoples of the Americas prior to the arrival in 1492 of the Europeans in a way that is comparable to The Iliad and the Odyssey, to the Nordic sagas of Beowulf and other similar stories, and even to religious texts like the Bible, the Ramayana, and the Quran.”

Stavans drew multiple comparisons between the Popol Vuh and these texts.“If you see the Ramayana, if you see the Bible, you see literary texts that tell us stories about the gods and humans interacting,” he said. “Stories like the Ramayana are about genealogy, explaining how a people acquired its identity, what its mission is in life.

”That’s what he sees in the Popol Vuh, which he describes as “a beautiful story” about “how the world was created. At the center of it are fallible humans. Within the humans, there’s a kind of selection of one people that is going to honor the deities. That people are the K’iche.”

Stavans lamented that when he was younger, the Popol Vuh and another foundational Mayan text, the Chilam Balam, were treated as anthropological or archaeological items, not as books. He said that he was “angry at the way [that] throughout Mexican history, indigenous cultures had been, like many people in time, fossilized, turned into fossils, seen as historical artifacts, historical entities, not incorporated in any meaningful way into the lens of daily life in Mexico, and even less so in Mexican culture.”

February 1, 2021 by admin Comments are off 0 viewson Arts & Entertainment