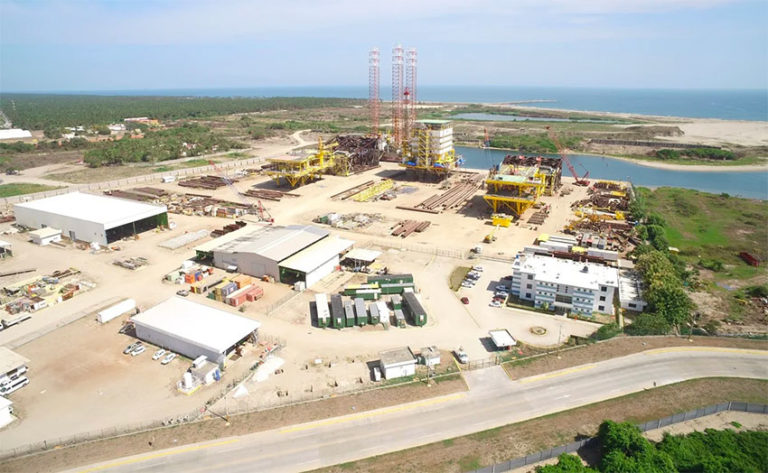 The International Monetary Fund (IMF) has recommended that construction of the new oil refinery on the Tabasco coast be postponed.

In a concluding statement after an official staff visit to Mexico, the IMF said that Pemex’s business strategy, including construction of the Dos Bocas refinery, is “crowding out resources for essential spending.”

Given the state oil company’s “widening losses,” it is advisable that it focus production only in profitable fields, the organization said.

Many analysts have criticized the plan to build the US $8-billion refinery on the grounds that it diverts resources from Pemex’s more profitable exploration business.

To improve its financial position, the state-run company, which has debt in excess of US $100 billion, should “sell non-core assets, curb plans to increase refining output at a loss and postpone new refinery plans …” the IMF said.

It recommended that Pemex partner with private firms, asserting that doing so would supply “needed capital and know-how.”

The government has been criticized for not allowing Pemex to enter into new joint ventures known as farm-outs with private companies.

In its concluding statement, the IMF also noted that the coronavirus pandemic “has exacted a tragic human, social and economic toll on Mexico.”

“The [Mexican] authorities are providing very modest near-term direct fiscal support. They increased health spending and direct budget support to households and firms by 0.7 percent of GDP. However, this compares with over 3 percent of GDP support among G20 emerging markets,” the IMF said.

“To stem the decline in economic activity and rise in poverty, Mexico would benefit from higher temporary near-term fiscal support of 2½–3½ percent of GDP (relative to pre-pandemic policy settings). Mexico has some fiscal space and enjoys comfortable market access that could be used during these difficult times.”

The IMF also said that there “appears to be room for further monetary easing,” even though the central bank has cut interest rates seven times this year, lowering the Bank of México’s benchmark rate from 7.25 percent at the start of 2020 to 4.25 percent.

“A lower cost of borrowing would help reduce debt servicing pressures, especially among weaker borrowers, possibly boost investment, and increase the marginal attractiveness of the credit facilities of the central bank.”

Farmers to stop military burning poppies; it’s their only source of income

They say authorities have failed to deliver on promises of education, health and road improvements

Residents of 33 communities in Guerrero have pledged that they will not allow the military to destroy their opium poppy plantations.

Townsfolk from the municipalities of Helidoro Castillo and San Miguel Totolapan who say that cultivating poppies provides them with their only source of income signed a document in early June in which they committed to defending their plants in the face of destruction by the army, which routinely burns fields of the illicit crop.

At a meeting in Helidoro Castillo on Sunday, leaders from the 33 communities agreed that if they don’t receive a commitment from federal authorities that their poppies will be respected, they will block highways in Guerrero.

In video footage of the meeting, one of the town commissioners proposes blocking the Acapulco-Zihuatanejo highway and the one linking Chilpancingo and Iguala.

Another town commissioner said municipal, state and federal authorities have failed to fulfill promises in the areas of education, health and construction of roads. “The truth is we’re forgotten,” he said.

According to a report by the newspaper Reforma, the community leaders warned that if something untoward happens to a military fumigation helicopter or to military personnel deployed to destroy poppies, it will not be their fault but rather that of the federal government.

In the June document, the residents pledge to defend their “work” until the government provides them with financial assistance that allows them to maintain their families.

“We are determined to prevent our poppy plantations from being destroyed whether it is by air or land,” the document said.

Reforma reported that the protest tactics of farmers from the Sierra region of Guerrero, some of whom have been growing opium poppies for decades, have become more radical, noting that residents of one Helidoro Castillo community detained a group of 40 soldiers in April last year to demand that they halt operations to destroy poppies.

Farmers from the Sierra region have also detained soldiers and police to demand that the government distribute free fertilizer.

Farmers say they use state-supplied fertilizer for crops such as corn, beans and squash. But federal and state authorities have detected that most farmers use the fertilizer for illicit crops, including opium.

She always maintained a sunny disposition and was proactive about her care, the hospital said

A 103-year-old Jalisco woman has beat Covid-19 after 11 days in the hospital battling the deadly coronavirus.

The woman, identified only as Doña María, left a public hospital in Jalisco Friday healthy, with a smile on her face, and to thunderous applause from the hospital’s staff.

“The whole time she was very animated, aware, talking with the doctors,” reported David Sánchez González, the hospital’s director. “At the end, she told us to take care of ourselves.”

The centenarian was admitted to the hospital September 22 after being referred there by her medical clinic, where she presented with a fever and difficulty breathing. According to Sánchez, she was likely the oldest coronavirus patient that the Mexican Institute of Social Security in Jalisco has ever treated.

Doña María arrived at the hospital with a preexisting condition, chronic obstructive pulmonary disease (COPD), which she developed from years of being exposed to wood smoke while cooking.

But she did not have other risk factors like diabetes, hypertension, or obesity, a fact which probably explained why she responded well to treatment, said Sánchez. She never needed to be on a ventilator.

“She’s the mother of five children and, really, is quite healthy, besides the pulmonary condition, which makes her dependent on portable oxygen,” he said, adding that she always maintained a sunny disposition and was proactive about her care.

Each Covid-19 case brings doctors at the hospital unique lessons, Sánchez said, but Doña María’s is one that has really motivated staff, “because we feel like what we’re doing matters.”