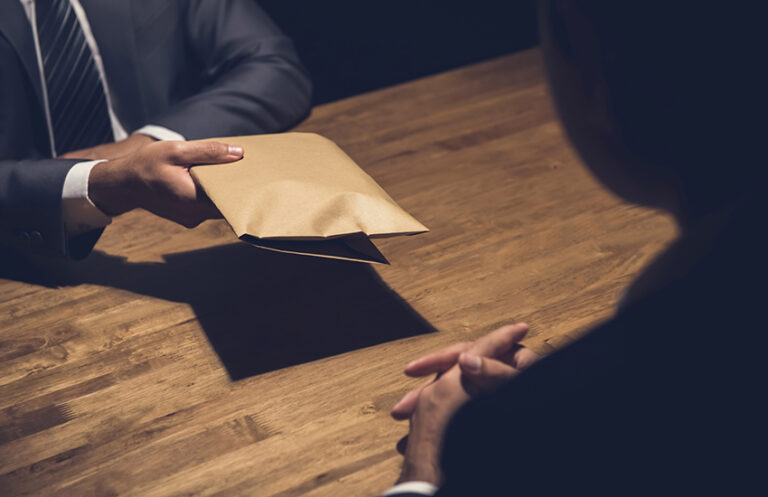 A new study says corruption in Mexico continues to worsen despite President López Obrador’s claims that his administration is eradicating the scourge.

It is the second consecutive year that Mexico’s score has declined. It was down 2 percent, to 4.55, on the 2020 CCC Index, which assesses Latin American nations’ ability to detect, punish and prevent corruption. The index was first published in 2019.

Mexico only ranked ahead of Paraguay, Guatemala, Bolivia and Venezuela this year. Uruguay led with the best score of 7.8 out of 10. In second to 10th places, respectively, were Chile, Costa Rica, Peru, Argentina, Brazil, Colombia, Ecuador, Panama and the Dominican Republic.

Developed by the Americas Society/Council of the Americas (AS/COA) and the global risk and strategic consulting firm Control Risks, the index looks at 14 key variables, including the independence of judicial institutions, the strength of investigative journalism and the level of resources available for combating white-collar crime.

“The CCC Index’s goal is not to shame or single out countries but to foster a policy-driven discussion, helping governments, civil society and the private sector identify — through data and a robust methodology — areas of success and deficiencies to be addressed,” the organizations said.

In three subcategories — legal capacity, democracy and political institutions, and civil society and media — Mexico achieved scores of 3.82, 4.08 and 6.35 respectively. The first two scores declined compared to last year, but the third increased.

In the legal capacity subcategory, Mexico fared best in “access to public information and overall government transparency” and worst in “independence and resources for the chief prosecutor’s office and investigators.”

The prosecutor’s office refers to the federal Attorney General’s Office, which is ostensibly autonomous but headed by a close ally of the president, Alejandro Gertz Manero, who has been described as a fiscal carnal, or government-friendly prosecutor, by government critics.

In the democracy and political institutions subcategory, Mexico’s best result was in “overall quality of democracy” and its worst was in “lawmaking and ruling processes.”

López Obrador, who has been accused of seeking to concentrate government power in the executive, said Sunday that Mexico is an example to the world in “how to govern in a democracy.”

“… Mexico is an example to follow in the world in this way of governing, with the people [and] with honesty, austerity [and] efficiency, … guaranteeing the right to dissent,” he said during a visit to Oaxaca.

In the civil society and media subcategory, Mexico’s highest score was in “civil society mobilization against corruption” and its lowest was in “education improvements.”

There are numerous civil society organizations dedicated to the fight against corruption in Mexico, including Mexicans Against Corruption and Impunity, which has exposed corruption in the current government, angering López Obrador, who describes the group as a political opponent.

The CCC Index report (opens as a PDF) acknowledges that Mexico is on a “clear downward trajectory” in terms of its capacity to detect, punish and prevent corruption.

“… Over the past year, President Andrés Manuel López Obrador (AMLO) has continued the anti-corruption rhetoric that he campaigned on in 2018, even declaring in a morning press conference this year that ‘there is no more corruption’ in Mexico,” the report said. “However, prominent corruption cases, including former Pemex CEO Emilio Lozoya’s, remain unresolved, while corruption allegations involving politicians, including members of AMLO’s Morena party, have emerged.”

Lozoya was extradited to Mexico last July after being arrested in Spain on corruption charges, but he has still not faced trial, while Public Administration Minister Irma Sandoval and Federal Electricity Commission chief Manuel Bartlett are among current government officials whose reputations have been tainted by corruption accusations.

The report noted that the National Anti-Corruption System, devised by the previous federal government, has not been implemented, “and even saw significant budget cuts as part of austerity measures” implemented by the López Obrador administration.

“This contributed to a 13 percent decline in the variable assessing the independence and efficiency of anti-corruption agencies. There has been a lack of transparency in both public procurement during the pandemic and in trust funds (fideicomisos), several of which have been dismantled and centralized under the executive branch,” it said.

“The country fared better in the civil society and media category, where Mexico ranks fifth regionwide. Despite AMLO’s rhetorical attacks on NGOs, civil society mobilization against corruption remains strong, registering over two points above the regional average, second only to Uruguay,” the report said.

The AS/COA and Control Risks said that in the months following the midterm elections, which were held June 6, “it will be crucial to monitor whether the integrity of independent institutions is maintained.”

“The president and members of Morena have criticized the National Institute for Transparency, Access to Information and Protection of Personal Data (INAI) and the National Electoral Institute (INE) and may pursue reforms that affect their autonomy,” the report said.

“AMLO has supported a Senate measure to extend the term of Supreme Court Justice Arturo Zaldívar, who has previously supported the president. The move raises questions about executive branch interference in the judiciary.”