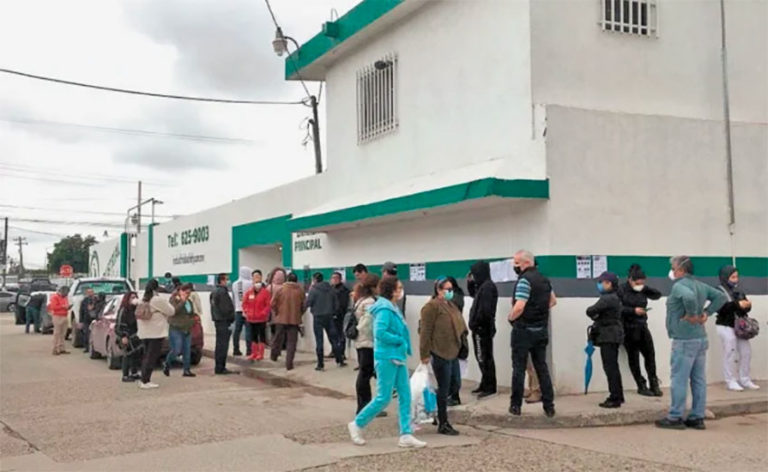 The governor of Baja California has warned that doctors are “falling like flies” in Tijuana due to a lack of personal protective equipment (PPE) amid the worsening coronavirus pandemic.

Jaime Bonilla made the remark in a video live streamed to social media on Monday, stating he was particularly concerned because doctors at the Institute of Social Security (IMSS) public clinic No. 20 in Tijuana who have become ill with Covid-19 also work at the city’s IMSS General Hospital.

“What concerns me … is that the General Hospital has the same doctors as [the] Social Security [facility]. We’re seeing now that they’re falling like flies because they weren’t given protection,” he said.

One health worker who asked not to be identified out of fear that he would lose his job told El Universal that when patients with respiratory problems first started arriving at the No. 20 clinic, employees were not told that they were suspected of having Covid-19.

Julio (not his real name) also said that that staff don’t have sufficient PPE to protect themselves while treating coronavirus patients, explaining that hospital authorities expect workers to wear the same mask for as long as 20 days.

“My colleagues have had to buy their own [protective] equipment, … there are long lines to buy gowns and masks because they’re not giving us enough,” he said.

Health workers at the No. 20 clinic have also taken to social media to complain about the lack of PPE. One was Dr. Faustino Ruvalcaba, who posted a letter to Facebook in which he outlined the situation.

Eugenio Derbez, a famous actor and comedian and friend of Ruvalcaba, read the letter in a video posted to Twitter on Sunday.

According to Derbez, the letter said that the hospital was overwhelmed with both confirmed coronavirus patients and people who have been diagnosed with atypical pneumonia.

“The public has no idea what is happening in the hospital. The third floor was prepared for the exclusive use of patients with coronavirus, but it is already full,” he said, reading from Ruvalcaba’s letter.

“We don’t have the equipment and material to be able to protect ourselves. … What we are using is equipment bought [with money] out of our own pockets. We’re spending more than a quarter of our salaries … to buy equipment,” the letter said.

Derbez begged for help for the public hospitals on Mexico’s northern border, calling on citizens to donate items such as masks, gowns and goggles.

In response, the IMSS chief in Baja California accused the actor of spreading fake news. Dr. Desirée Sagarnaga Durante said in a video posted to Twitter that there was no doctor by the name of Faustino Ruvalcaba at the IMSS No. 20 clinic, charging that the letter was made up.

Her video, which had been viewed 1.5 million times as of Tuesday morning, triggered a social media backlash against Derbez, The San Diego Union-Tribune reported.

Derbez countered with another Twitter video posted beneath a message that read: “No … it’s not fake news. It’s sad that more time is being spent trying to hide the truth than saving lives.”

“There have been a number of attacks against me and the doctors saying that this is all a lie,” he said in the video. “I just hung up with doctors at the clinic and I want to tell everyone that what I say is true. … I don’t like to get involved in politics. I’m not attacking anyone,” Derbez said.

A reporter for the news website Noticias Ya subsequently tracked down Ruvalcaba, interviewed him and shared the video on Facebook. He confirmed that the situation at the IMSS No. 20 clinic is indeed dire.

“The epidemic has completely exceeded our weapons [to control it]. That’s clear,” Ruvalcaba said.

Governor Bonilla also came to Derbez’s defense, saying in his video address on Monday that while he may not have the complete and exact information about the situation at the IMSS clinic, many health workers there have become ill with Covid-19. He said that he has been worried about the IMSS health system since the beginning of the coronavirus pandemic.

For its part, IMSS said in a statement on Sunday that it “promptly attended and controlled an external contagion in several workers” at the No. 20 clinic in Tijuana.

The outbreak “was not attributable to [a lack of] personal protection equipment, nor to the care of suspected or confirmed [Covid-19] patients,” it said.

President López Obrador, meanwhile, blamed his adversaries. He told Tuesday’s press conference that “the conservatives” have launched a disinformation campaign that co-opts well known personalities to relay their message and “stop the transformation of Mexico.”

He cited an athlete, a recording artist and a comedian as being among those who have been recruited in order to “maintain the system of corruption.” Soccer star Javier “El Chicharito” Hernández, singer Thalía and now Derbez have all been critical recently of the López Obrador administration.

There were 368 confirmed cases of Covid-19 in Baja California as of Monday but state Health Minister Alonso Pérez Rico has acknowledged that the real number of cases is probably much higher.

Alheli Calderón, a medical researcher at the College of the Northern Border, said earlier this month that it is not plausible that Mexico’s northern border states have so few cases of Covid-19 compared to the states they adjoin in the United States.

California had more than 24,000 confirmed cases of Covid-19 as of Tuesday morning, according to a New York Times database, almost 2,000 of which are in San Diego, located just across the border from Tijuana.