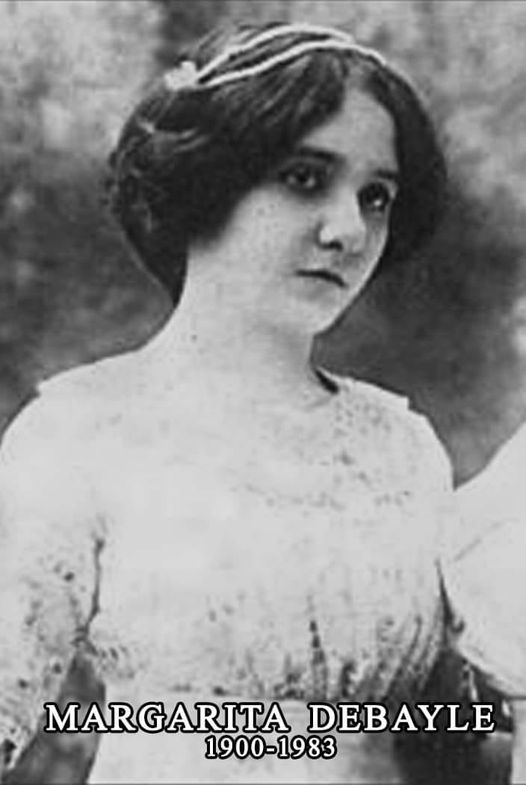 On a day like today, the Nicaraguan Margarita Debayle is born, muse of the poet Rubén Darío and aunt of the presidents Luis and Anastasio Somoza Debayle.

Margarita is beautiful the sea,

she carries a subtle scent of orange blossom;

in the soul a lark sing;

Margarita, I’m going to tell you

Margarita Debayle Sacasa was born on July 4, 1900, in León, Nicaragua,

daughter of Dr. Luis H. Debayle and Casimira Sacasa, she was a member of one of the most distinguished families, her father was the personal doctor of the poet Rubén Darío, she studied at the Asunción College.

After 14 years, Rubén returned to Nicaragua on Nov. 23, 1907; months later he was invited by the Debayle family to a summer house, on the island of Cardón, Margarita asked him to write a story for her, and Rubén agreed delightedly, during the night, sitting on a stone facing the sea, he began to write.

The next day Rubén recited the poem to him and said: Here is the poem, you can hear it in its entirety narrated by a 6-year-old boy, I hope you like it as much as I do.

“I asked him for a story and he narrated it to me in his poetry so wonderfully, I went crazy with joy and to please him I learned it by heart and recited it to him and when he heard me he hugged me and kissed me effusively and I saw him shed some tears”, Margarita related in an interview with Novedades Cultural.

Rubén also wrote one to María and Salvadora, 12, entitled A Salvadora Debayle, part of the poem said:

In this life of infinite longing

we all seek salvation,

Save your heart first!

Margarita along with her sister, her Savior, were sent to Belgium to study, but at the beginning of the First World War they moved to London.

In 1916, while in Philadelphia, she received a letter in verses from Rubén Darío, where he described her in her imagination as a whole woman, Margarita considered it a second poem and gave them to a nun who taught her literature to keep, days later she found out of Darío’s death, and with great sadness he read the poem daily, months after Rubén’s death, he returned to Nicaragua in August of that year on vacation, and his father asked him for those verses, but the nun who had them unfortunately she died in an accident, and was buried with a chest containing writings, including Margarita’s letter, but was never recovered.

Margarita continued with her studies in countries such as Pennsylvania, ending her career in Boston.

In 1919, her sister, Salvadora, married Anastasio Somoza García and in 1925 she married her cousin Noel Ernesto Pallais, Nicaraguan ambassador to Peru.

On March 24, 1938, he received a hard blow, her father Luis H. Debayle died at the age of 72, thanks to him, every October 26 the Nicaraguan Doctor’s Day is celebrated, which is the date of her birth. .

On September 29, 1956, her brother-in-law Anastasio Somoza García died after being seriously injured in an attack in the city of León on the 21st by a young man named Rigoberto López Pérez, causing a wave of tension in the country.

In 1967, on the first centenary of Rubén Darío’s birth, she was declared a National Muse, the event was held on January 16 at the González Theater, at which time she fluently and emotionally recited the famous apologue that the go, details El Nuevo Diario in its report “The celebration of the birth centenary of Rubén Darío in 1967.”

Since my childhood I always had a great desire to meet that great friend and admirable poet that my father loved and mentioned so much, and when I met him I was greatly impressed, because all of him radiated sympathy, goodness and talent

And although I was still very young, I knew how to appreciate the special affection that he showed me since he met me, Margarita said in an interview with Novedades Cultural in 1968.

In 1975 she presented the high school diploma to Ildo Sol, grandson of Rubén Darío Sánchez “Güicho”, at the graduation ceremony at the Rubén Darío National Theater.

In 1978 war broke out in Nicaragua and her nephew Anastasio Somoza Debayle resigned the presidency in July 1979, she went into exile heading to Miami, where she spent a season, and then went to Lima, Peru, where her life lived. youngest daughter.

On October 4, 1979, his grandson Marcel Pallais Checa was found dead on a property near the Central American University, the true circumstances of his death were never known and the following year his nephew Somoza Debayle, was assassinated in Paraguay by a commando Argentinian.

On June 3, 1983, her brother Luis Manuel Debayle died at the age of 89, who was also a doctor and businessman.

Margarita Debayle died on Dec. 19, 1983 at the age of 83 due to natural causes, three years later, on February 1, 1987, her sister Salvadora Debayle passed away in Washington DC.

In 1998 the Nicaraguan writer Sergio Ramírez published the novel “Margarita, está linda la mar”, with which he won the José María Arguedas Prize in 2000.

In 2008 the poem “A Margarita Debayle” was translated into Japanese by Dr. Nahoito Wanatabe, who also translated “Songs of Life and Hope”.

The poem “A Margarita Debayle” was set to music by Nicaraguan singer-songwriter Ofilio Picón, and included on his 2006 album, “Darío in the memory of the millennium.”

In 2010, her ashes were brought from Peru, and deposited in the cathedral of León, in Nicaragua, near the tomb of Rubén Darío and his parents Luis and Casimira Debayle.

July 5, 2021 by admin Comments are off 0 viewson Arts & Entertainment