Many of us have heard so much about fake news and all of that, lately. So, Tyler Durden bring us this interesting analysis piece that puts into question the mainstream media, going back to their coverage of the wars in the Middle East to Latin America. Hope you enjoy it. – Marvin Ramírez.

Western media is spreading fake news and fabricating stories with evil intentions. Western Media is biased and creating unrest and chaos in various parts of the world. Media is being used by the Western world to coerce, influence and achieve their ill-political motives. Unfortunately, Western Media is already dominating and controlling public opinion throughout the world. 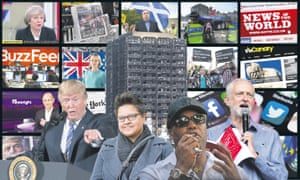 Let me give you a particular example of the BBC (British Broadcasting Corporation). BBC reported that the Saddam Hussain regime in Iraq possesses Weapons of Mass Destruction (WMD). America along with its allies attacked Iraq, destroyed Iraq, killed millions of people, damaged Infrastructure, Power Houses, Telecommunication, Hospitals, Schools, Churches, Mosques, Roads, Industry, Oil Wells, Refineries, etc. Finally noticed that there were no Weapons of Mass Destruction (WMD). Later on, the British Prime Minister of that time, acknowledged that the BBC news was not accurate, and information about WMD was not correct. But after damaging a country totally and harming millions of people, pushing Iraq into stone ages, one’s mere apology may not be accepted and may not be forgiven by humanity, irreversible damage to Iraq may never be forgotten by the history.

It is worth mentioning, Iraq was a very stable, oil-rich, and total welfare state under President Saddam Hussain. Education, health care was free of cost to its citizens, plenty of food, variety of food was available abundantly. Electricity was available in all parts of the country in abundance sufficiently. Fuel and items of daily use were available everywhere conveniently. The society was very much stable, satisfied and living a comfortable life. All factions of the society were enjoying harmony and was a tolerant society. It might be possible a few exceptionally politicians opposing the ruling party “Bath” or President Saddam Hussain, were victimized. They might be few in numbers or two digits only. But the vast majority of the nation was comfortable with the rulers.

But after the US war on Iraq, today, people of Iraq are facing a shortage of food, fuel, electricity, medicines, and items of daily life. No free education and health care are provided by the government. The society is extremely polarized, intolerance and factionist are very much common. Terrorism, lawlessness, and chaos are witnesses everywhere.

Is publically apology is sufficient to cool down the suffering of millions of Iraqis? Can anyone ignore the dirty role of the BBC? Is it possible, people of Iraq forget the BBC? Can the victim forgive the BBC?

It is only one example only. The same trick was played in the case of Syria. BBC reported that the Syrian Government possesses Chemical Weapons and is using against rebellions.

Western Alliance NATO, under the US leadership, attacked Syria, killed millions of innocent people, displace millions of common citizens, damaged the whole country, and pushed the Syrian into stone ages. Forced the Syrian people to take asylum in the Western World where they are humiliated, especial the women and children are being abused. A huge portion is forced to live in temporary camps within the country, where life is very hard and lacks the basic amenities of daily life. Western World has made the life on common Syrian misery and curse only. While Syrians was a very stable country, may not be very rich, but with all basic amenities available conveniently.

Nature has blessed the Syrians with best fruits and vegetables, and traditional Syrian food is one of the important attractions in the region. The people of Syria are very pretty and a superior creature. They can compete any beauty villain in the world easily. The law and order situation was very much comfortable and society was stable and living in harmony.

The same is the case of Libya, where ill-motivated fake news led to the destruction of a sovereign country. A very stable, oil-rich nation turned into chaos and lawlessness. A nation with all comforts and facilities has been deprived of even basic needs of life. A sate with total welfare for its citizens has been changed into a lack of everything like food, medicines, fuel, electricity, etc.

The situation in Yemen, Egypt, Tunisia, and Afghanistan is not much different than this. The US admits its role in spreading fake information about Afghanistan and admits its failure in Afghanistan. Pakistan, Turkey, and Iran are on the list and Western World is engaged in a hybrid war, where media is the basic weapon and in some cases over-engaged in spreading fake news and fabrication of stories to create chaos and promote instability.

In Pakistan, we noticed many illegal radio stations operating by Western-funded NGOs, spreading hate, misinformation, and troubles only. Many media houses and individual journalists are hired by Western World and used as front-man or under-cover operation of hybrid war in Pakistan.

Only in the Middle East, around two million people have been killed, several million have been displaced from their homes, either to live in Camps or to move to other countries seeking asylums.

In fact, the world is full of such examples and unfortunately, the developing world is the victim and under direct target.

The recent reports regarding Mike Pompeo regarding lies, cheating, stealing, etc are further confirmation that information is deliberately changed to achieve designed results. The US role in

1970s ‘Operation Condor,’ in which South American dictators systematically tortured and killed dissidents in the region. An estimated 60,000 people were killed by the Latin American states in the clandestine operation, 30,000 in Argentina alone.

Covert operations, ousting democratically elected governments, inciting revolts and supporting transnational companies are run of the mill actions for the CIA, all justified as part of the fight against those who question U.S. interests. Actions that continue until this day. In 2018, one of its offshoots, the National Endowment for Democracy (NED) channeled over US$23 million to meddle in the internal affairs of key Latin American countries, under the flagship of “human rights” or “democracy,” which represent a real menace for national sovereignty and the continuity of progressive governments in the region and the world.

These are the only few known facts, there must be much more in various parts of the world similar incidents and fake news or spread of misinformation.

I believe the Western World is misusing Media and the spread of distorted information as an unarmed wing or tool of defense and diplomatic strategies, to achieve their evil goals. It seems Western media is notorious for spreading fake news and the fabrication of stories. They have lost their credibility at all. The intellectuals and people with common sense no more believe Western Media anymore. The credibility of Western Media is challenged and lost recognition among the people having conscious.

I understand some of you may disagree with my opinion and maybe offended but at least it may initiate an open debate.

Let’s build a better world, where tomorrow should be better than yesterday. Our next-generation must not face the same challenges which we have faced. Love humanity, love peace, seek the truth.

December 16, 2019 by admin Comments are off 0 viewson Editorial