House Electoral College vote certifies Biden as the next president 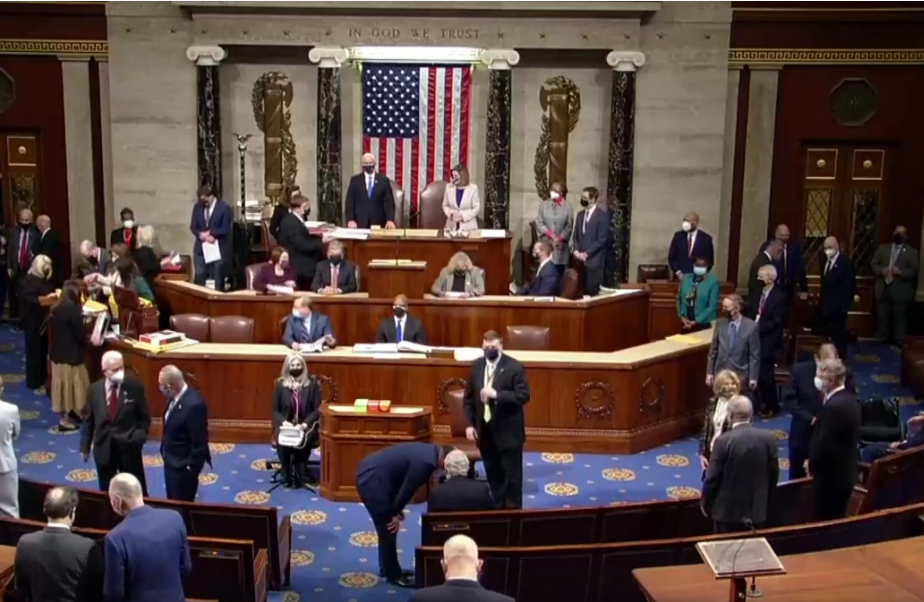 After mob disrupts proceedings, Congress turns back Electoral College challenge, certifying Biden as the next president

After an extraordinary act of violence from a riotous mob on Wednesday afternoon forced U.S. legislators to evacuate the Capitol during the counting of the Electoral College votes in the presidential election, Congress voted in the early morning hours of Thursday to certify the results showing President-elect Joe Biden defeated President Trump.

While a group of Republican lawmakers challenged the results in Arizona and Pennsylvania, those objections did not withstand a vote in either the House of Representatives or the Senate.

At approximately 3:33 a.m. ET on Thursday, Congress had certified enough electoral votes to surpass the 270 threshold that guaranteed Biden would become the 46th president, effectively ending a desperate bid by Trump and his supporters to overturn the results of the November election.

“The votes for president of the United States are as follows: Joseph R. Biden, Jr. of the State of Delaware has received 306 votes. Donald J. Trump of the state of Florida has received 232 votes,” Vice President Mike Pence declared.

“The announcement of the state of the vote,” Pence continued, “by the president of the Senate, shall be deemed a sufficient declaration of the persons elected president and vice president of the United States each for the term beginning on the 20th day of January, 2021.”

Moments after Pence declared Biden the winner of the election, Trump released a falsehood-laden statement in which he pledged an “orderly transition” of power.

“Even though I totally disagree with the outcome of the election, and the facts bear me out, nevertheless there will be an orderly transition on January 20th,” Trump said in the statement made public by White House Deputy Chief of Staff Dan Scavino. “I have always said we would continue our fight to ensure that only legal votes were counted. While this represents the end of our greatest first term in presidential history, it’s only the beginning of our fight to Make America Great Again!”

Earlier on Wednesday, in the wake of the attack on the Capitol, fewer Republicans followed through with promises to contest the certification, yet enough did to drag the debate into early Thursday morning.

The initial session abruptly ended at approximately 1:40 p.m., during an objection made by Rep. Paul Gosar, R-Ariz., and Sen. Ted Cruz, R-Texas, against the slate of electors from Arizona. Both chambers had begun debating the challenge when a pro-Trump mob stormed the Capitol, sending lawmakers scurrying to safety.

Just an hour earlier, Trump spoke at a large rally in Washington, where he repeated numerous discredited claims, including that the election was rigged against him. He ominously informed his own vice president what he expected of him.

Trump also encouraged his crowd of roughly 25,000 supporters to head to the Capitol and make their displeasure with the certification clear.

Chaos ensued as Trump’s supporters clashed with police, broke windows, entered the Capitol and ransacked congressional offices. At least one person was shot and killed during the siege, three other people died and more than a dozen law enforcement officers were injured.

As Capitol Police finally began clearing the building late in the afternoon, Trump issued a now deleted one-minute videotaped statement directed at the rioters that began by expressing sympathy for their “pain” and “hurt” before launching into a litany of his own grievances about “an election that was stolen from us.”

“But you have to go home now,” Trump said. “We have to have peace.”

Lawmakers returned to the Capitol around 8 p.m. to resume the process. “All this accomplished was to delay our vote by a few hours,” Minority Leader Chuck Schumer, D-N.Y., said.

Vice President Mike Pence, who returned from the siege of the capital from a secure location to preside over a joint session of Congress, certified the electoral votes, despite pleas from Trump to attempt to block them.

Before the certification, Pence addressed the rioters who smashed in windows and trespassed into lawmakers’ offices and the House and Senate chambers.

“To those who wreaked havoc at our Capitol today, you did not win,” Pence said. “Violence never wins. Freedom wins. And this is still the people’s house.”

While Thursday’s vote reached an explosive conclusion, the final results of the election were not all that close. Biden received 7 million more popular votes than Trump.

With his Electoral College votes certified by Congress, Biden is now set to be inaugurated on Jan. 20.