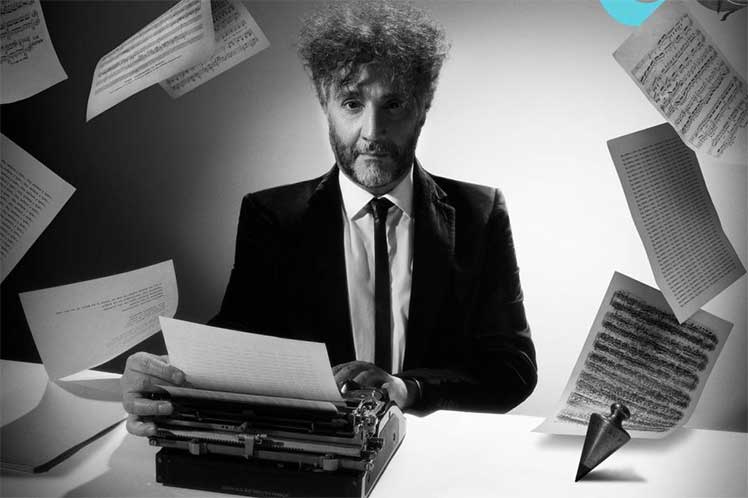 BUENOS AIRES, Oct 3 – Argentine rocker Fito Páez is currently working on his first live concert via streaming, which he will offer from the Movistar Arena in Buenos Aires on Nov. 1.

Newly nominated with this phonogram in three categories for the 2020 Latin Grammys, Paez will take the stage from 22:00 local time backed by his band after long months of self- quarantine since he was forced by the pandemic to cancel on March 13 a concert in his natal Rosario, just on his 57th birthday.

Although he has been very active and was even one of the first to open the privacy of his home to provide concerts through social networks, the author of classics such as ‘Yo vengo a ofrecer mi corazón’ ( I come to offer my heart) and ‘Mariposa Technicolor’ (Technicolor Butterfly) is preparing for his return, with a staging by the outstanding set designer Adriana Maestri.

Recorded at the Capitol Studios, Los Angeles, and with luxury guests such as Abe Laboriel, Paul McCartney’s drummer, Páez’s new album succeeds ‘La Ciudad Liberada’ (The Liberated City) in 2017 and features pieces such as ‘La Cancion de las Bestias’ (The Beasts’ Song), ‘Resucitar’ (Resurrection) and ‘Las Cosas que me hacen bien’ (The things that do me good).

India Martínez, one of Spain’s most captivating voices, joins superstar Marc Anthony on “Convénceme,” a track that demonstrates the power and magic of Latin music. “Convénceme” is available from today on all digital music platforms.

The chemistry between India and Marc was captured in the interpretation of “Convénceme” and in the video clip, directed by Gema Lozano, where both singers delight us with the stage performance that they accompany with their wonderful voices.

India and Marc initially met through their friend Alejandro Sanz. The Cordovan sent the song to the New Yorker and he was immediately fascinated, with “the voice and the spectacular style” of India.

“I was captivated. It was one of those occasions that I had to listen to the song over and over again, “said Marc.” The sensitivity and the union of the pop ballad with those characteristic sounds of his, so from his homeland, the lyrics with that perfect balance between the romantic , the mystical and the refreshing… All that inspired me to be part of this new collaboration ”commented the singer.

For her it is like a fantasy come true: “I don’t know how many times I have dreamed of singing with him … It is clear that when you dream something out loud and throw it into the universe someone hears you,” said India. When she received the song with Anthony’s voice, India burst into tears.

Cuban musicians stand out in nominees’ list for Latin Grammy 2020

The tradition, sound, rhythm and flavor of Cuban music stands out today among the list of candidates for the 2020 Latin Grammys, with nominations from half a dozen groups from Cuba.

According to the information published on the official website of the contest, the Failde Orchestra joins the candidates this year with the Failde con Tumbao album, produced under the Egrem label, while the Aragon Orchestra performs with the Icon phonogram, from the Puntilla Music record label.

In this way, the Aragon Orchestra is once again among the candidates for the Latin Grammy Award, after its nomination in 2019 for participating in the Cuba Linda album, by the Dutch trumpeter Maite Hontele along with William Borrego, Roberton, Alain Perez and Osain del Monte.

Within the Best Urban Song section, the duo Gente de Zona is very noticeable for the ‘Muchacha’ track, made with the collaboration of Becky G and Angel Arce ‘Pututi’, under the label Sony Music Entertainment US Latin LLC and Magnus Media LLC.