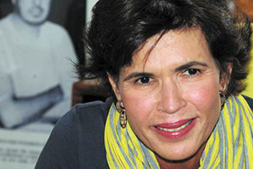 Like her mother, Cristiana Chamorro, the daughter of former president Violeta Barrios and assassinated journalist Pedro Joaquín Chamorro Cardenal, could be a good challenge to President Daniel Ortega in Nicaragua.

In an interview suggesting her candidacy, Chamorro stated:

“Nicaragua is interesting. Ortega fought to overthrow Somoza and then Ortega became a Somoza. Then my mother came, competed against Ortega and beat him … it may be. You don’t have to get ahead of the times, but I don’t see any surprise because… like other women like me, we feel that Nicaragua needs that change, and if one has to do it, one does it.”

Biden rrders Census Bureau to include undocumented immigrants in apportionment

The secretary of commerce “shall report the tabulation of total population by State that reflects the whole number of persons whose usual residence was in each State as of the designated census date in section 141(a) of title 13, United States Code, without regard to immigration status,” the order states.

“In addition, the Secretary shall use tabulations of population reflecting the whole number of persons whose usual residence was in each State as of the census date, without regard to immigration status, in reports provided to the Governor and officers or public bodies having responsibility for legislative apportionment or districting of each State,” it added.

The Census Bureau was supposed to hand in the report by Dec. 31, 2020, but missed the statutory deadline. The bureau soon after stopped complying with Trump’s orders. Bureau Director Steven Dillingham, a Trump appointee, resigned on Jan. 18.

January 30, 2021 by admin Comments are off 0 viewson Latin Briefs