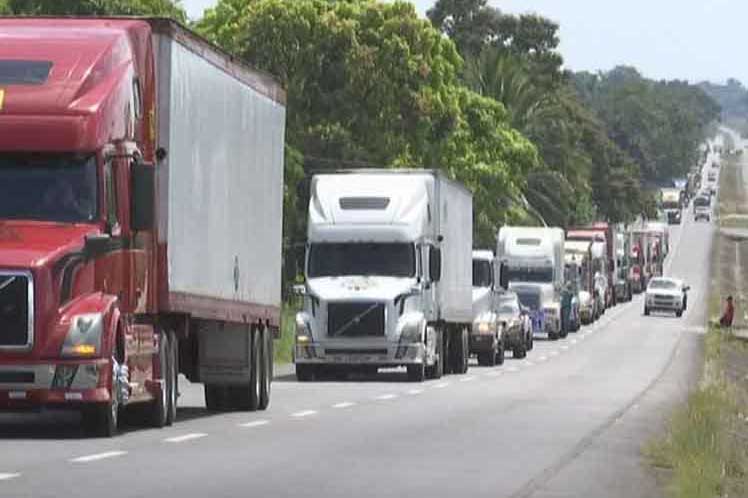 Panama, Oct 7 – Losses due to Costa Rica’s border shutdown caused by popular riots in its neighboring nation amounted to over 30 million dollars, according to Transporters Union.

In statements to the press, Rodolfo De La Guardia, president of the Council of Logistics Company, assured the shutdowns generate negative consequences on domestic economy since they make it impossible to export and merchandise traffic from Panama to other countries in the region.

He specified there are some pharmaceutical products, palm oil and others such as bananas that, if not sent to their destination on time, could deteriorate.

Although he did not refer to an exact figure, the businessman emphasized that any situation at Panama-Costa Rica border really affects business.

On Tuesday, a caravan of trucks waited for the opening of the border to continue heading along the Inter-American highway, the transfer point of land trade to/from Central America.

De La Guardia urged the neighboring country and its people to seek a solution as soon as possible so that the border is definitively opened and trade continues, as this not only affects Costa Rica, but also the entire region.

After the outbreak of the Covid-19 pandemic in the world, the Panama Canal was affected by the consequences of the economic contraction, with emphasis in May and June, when crossings dropped by one-fifth, mainly cruise ships, vehicle carriers and ships laden with natural liquefied gas, according to the source.

The crossings of ships and cargo normalized in August and September, so the fiscal year ended with 475.1 million tons of cargo and 13,369 ships, although both figures were under the plans, the ACP noted.

Container carriers were the most important segment and contributed 35% of the cargo handled during the abovementioned period, followed by bulk carriers, tankers and ships carrying natural liquefied gas and other gases.

The H-1B is a non-immigrant United States visa for specialized workers, including areas such as IT, engineering, architecture, medicine and others – fields that normally require a degree.

The Trump administration on Tuesday announced new changes to the program of the H-1B visa, touting the move as a means of protecting American wages and cracking down on market abuse.

According to Fox News, citing the Department of Labor, the new rule will change the way the so-called ‘prevailing wage’ is formed with regard to workers in specialized fields, commonly resulting in making employers pay higher salaries.

The move aims at making sure that wages are not artificially suppressed by employers who hire would “lower cost foreign labor”.

“With millions of Americans looking for work, and as the economy continues its recovery, immediate action is needed to guard against the risk lower cost foreign labor can pose to the wellbeing of US workers,” according to Deputy Secretary of Labor Patrick Pizzella.

According to Pizzella, the to-be-introduced new rule will be “faraway one of the most significant reforms made to the H-1B program in the past 20 years”.

“The H-1B program has been abused by some companies who seek to undermine American workers by bringing low cost or low paid foreign labor into our country,” Deputy Homeland Security Secretary Ken Cuccinelli said, cited by Fox News. “The DHS rule will affect over one third of H-1B petitions — I cannot overstate how big a deal this is.”

One change is thought to be an altered definition of the “specialty occupation” to a job, that would require a degree rather than simply recommending it, while also “tightening standards to require that foreign workers show specialized merit to establish their eligibility”.

The H-1B program will also envisage more frequent vettings for compliance with its requirements – moreover, it is noted that in case one fails to fit them, it can lead to “denial or revocation of employer H-1B petitions”.

Trump, who is known to be tough on immigration and visa policy, in June signed an executive order suspending a variety of visas, including the H-1B, until the end of 2020, citing fear that foreign workers would take jobs from Americans.

The move received criticism, particularly regarding the H-1B visa, with many noting that this type of visa is aimed primarily at filling gaps in the US job market that cannot be filled by US-born workers.

Pizzella, when announcing the changes to the program, outlined that they would still allow gaps to be filled, while also giving US workers a “fair shake”.

The US issues around 85,000 H-1B visas annually, according to United States Citizenship and Immigration Services (USCIS) data, with the majority of applicants from China and India.