BREAKING: Uber and Lyft Suffer Another Legal Blow Over Misclassification 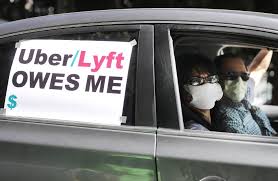 Just weeks after Attorney General declared the companies’ misclassification illegal,
PUC’s decision is another massive blow to gig corporations’ effort to buy their own law on November ballot

Sacramento — The California Public Utilities Commission ruled today that Uber and Lyft drivers are employees under California law, adding even more pressure on the companies to start following the law that requires them to pay legal wages, provide unemployment benefits, sick pay and safe working conditions to the drivers who have become essential workers during the COVID-19 pandemic.

“Today’s ruling shows Uber and Lyft are violating the law just as they embark on a $110 million campaign to buy their own law this November,” said Art Pulaski, the Executive Secretary-Treasurer of the California Labor Federation, AFL-CIO. “This deceptive ballot measure is nothing more than an attempt by gig companies to create a loophole to keep pocketing billions by avoiding the rules all other companies follow.”

The San Francisco Chronicle’s report says the ruling marks a “significant development in the battle over drivers’ status.”   The ruling goes on to say that the PUC must ensure the gig companies comply with legal employment requirements, including providing workers compensation coverage.

Today’s ruling comes just weeks after Attorney General Xavier Becerra and the city attorneys for San Francisco, Los Angeles, and San Diego filed a landmark lawsuit after determining that Uber and Lyft had been breaking California law by misclassifying drivers as independent contractors since the companies began operating in the state.