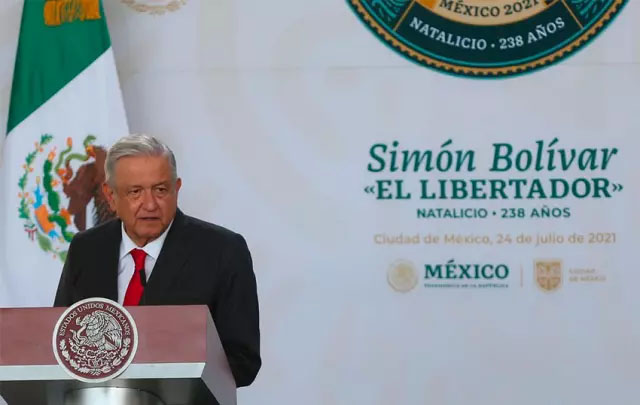 Cuba is an “example of resistance” and the entire island nation should be declared a World Heritage site, President López Obrador said Saturday.

He made the remarks at an event in Mexico City to commemorate the 238th anniversary of the birth of Simón Bolivár, a military and political leader known as the “liberator of America” and a proponent of a unified Latin America.

Cuban Foreign Minister Bruno Rodríguez was among the guests at the event, held at the Chapultepec Castle.

“We can agree or not with the Cuban Revolution and its government but having resisted 62 years without subjugation is quite a feat. … For their struggle in defense of the sovereignty of the country, I believe that the Cuban people deserve the prize of dignity and the island should be considered the new Numantia [an ancient Iberian Peninsula city that clashed with Ancient Rome] for its example of resistance,” López Obrador said.

“And I think that it should be declared a World Heritage site for the same reason,” he said.

“… I also maintain that it’s now time for a new coexistence among all the countries of America because the model imposed more than two centuries ago is exhausted, it has no future, … it no longer benefits anyone,” López Obrador said two weeks after calling for an end to the U.S. trade embargo on Cuba, which has recently seen large protests against the Communist Party government led by President Miguel Díaz-Canel.

Mexico must ensure that it is not seen as a “protectorate, colony or backyard” of its northern neighbor, López Obrador said.

“… Obviously it’s no small thing to have a nation like the United States as a neighbor. Our proximity obliges us to seek agreements … but at the same time we have powerful reasons to assert our sovereignty,” he said.

The president also suggested that a common market similar to the European Union model could be created in Latin America.

“The proposal is neither more nor less than to build something similar to the European Union, but adhering to our history, our reality and our identities,” AMLO said.

In that context, the Organization of American States (OAS) should be replaced “by a body that is truly autonomous” and “not anybody’s lackey,” he said, insinuating that it takes orders from the United States.

“It’s a complex issue that requires a new political and economic vision. … [It’s] a large task for good diplomats and politicians, like those who fortunately exist in all the countries of the continent,” he said.

“What I’ve suggested here might seem to be a utopia but it must be considered that without ideals on the horizon you don’t get anywhere. Let’s keep the dream of Bolívar alive.”