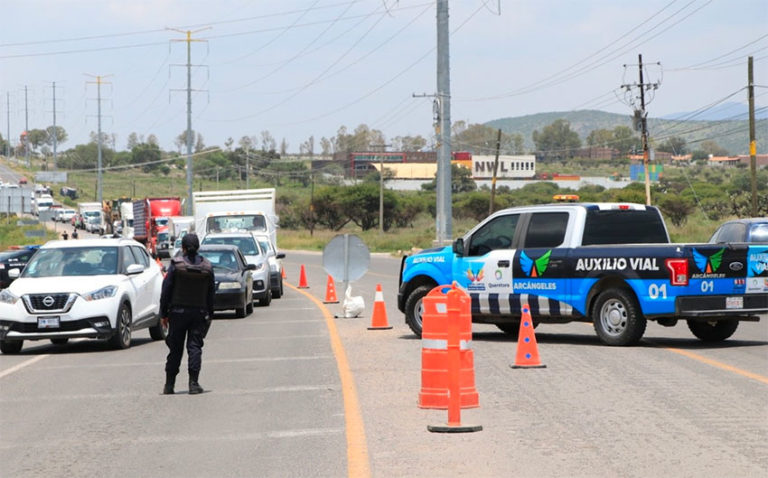 A fine and jail time followed their refusal to don masks

Two visitors to the city of San Miguel de Allende have been arrested and fined by authorities after refusing requests to wear a protective mask in public.

The man and woman — only identified by authorities as “Victor G.” and “Paulina H.” — were visiting from the neighboring state of Querétaro when they were arrested Saturday evening while walking with a third person, also visiting from Querétaro.

According to authorities, a police officer approached the trio as they were walking in the downtown historic area and reminded them that they were legally required to wear masks. The third person in the group at that point donned a mask, authorities said, but the two arrestees refused, authorities said.

They were taken into custody and later ordered by municipal authorities to pay a 500-peso fine and spend 12 hours in police custody, according to a press release from Mayor Luis Alberto Villarreal’s office.

According to Guanajuato’s Secretary of Public Health, San Miguel de Allende has recorded a total of 169 confirmed cases of Covid-19 and nine deaths since the beginning of the pandemic. Of those cases, 165 have occurred through community transmission. Guanajuato state currently has a red rating on the federal government’s virus risk stoplight system.

In the press release, Villarreal said that people who refuse to comply with the city’s public health regulations are endangering public health and could face up to 36 hours in custody. Villarreal told the newspaper Milenio recently that “a wrong step could return us to closing our tourism destination again.”

In March, the city closed access to non-residents who could not produce evidence of a compelling need to enter the city.

Although it recently reopened to tourism, the city has been taking its Covid-19 preventative measures increasingly seriously. Since May 1, it has been urging people to wear masks in all public spaces, including while walking outside, on public transportation, and inside businesses — a requirement that gained teeth July 10 when the Guanajuato state government certified it as an official ordinance.

Beginning May 29, the city installed health checkpoints at entry roads from the neighboring cities of Querétaro and Celaya. Officials have been asking those entering the city limits the purpose of their visit, taking car occupants’ body temperature, reminding people of the legal obligation to wear masks in the city, and offering a free mask to those who say they don’t have one. Transit authorities have been monitoring municipal bus routes to ensure that drivers are wearing the required masks throughout their routes.

The municipality also began bolstering the entry checkpoints with dogs trained to sniff out drugs and explosives after an incident at a checkpoint where a dog detected a bag of marijuana under a seat.

In other Mexico news:

Fund expects Mexico’s GDP to shrink 10.5 percent this year, a sharp drop from its April prediction

The coronavirus-induced economic crisis will hit Mexico harder than any other country in Latin America, predicts the International Monetary Fund (IMF).

In its June World Economic Outlook Update, the IMF forecast that Mexico’s GDP will shrink 10.5 percent this year, 3.9 percent below its April prediction of a 6.6 percent contraction.

The forecast is considerably worse than those of the World Bank, the Organization for Economic Cooperation and Development and the United Nations Economic Commission for Latin America and the Caribbean, which are currently predicting that Mexico will suffer an economic contraction in 2020 of 7.5 percent, 8.6 percent and 6.5 percent, respectively.

If the IMF prediction proves to be accurate, Mexico will suffer its worst recession since 1932 when the economy contracted 14.8 percent amid the Great Depression.

The organization predicts that the GDP of the Latin America and the Caribbean region as a whole will shrink by 9.4 percent this year, while global economic output is forecast to contract 4.9 percent, a 1.9 percent decline compared to its April prediction.

“The Covid-19 pandemic has had a more negative impact on activity in the first half of 2020 than anticipated, and the recovery is projected to be more gradual than previously forecast,” the IMF said.

The growth forecast for Mexico is also below that of its North American trade partners, the United States and Canada, which the IMF predicts will suffer contractions of 8 percent and 8.4 percent, respectively, in 2020.

However, the outlook for Mexico in 2020 is better than the forecasts for the economies of France, Italy and Spain, all of which are predicted to contract by more than 12 percent.

The IMF predicts that the Mexican economy will grow 3.3 percent in 2021, an increase of 0.3 percent compared to its April forecast. However, the 2021 prediction for Mexico is below the 3.7 percent growth forecast for Latin America and the Caribbean and the 5.4 percent global forecast.

Mexico’s central bank is currently offering the most optimistic growth forecast for 2021, the newspaper El Universal reported, predicting that GDP will increase 4.1 percent.