by the ACI Press Newsroom

A statue of the Spanish Queen Isabel la Católica and the navigator Christopher Columbus was removed on July 7 from the California Capitol in the city of Sacramento (United States), where it has remained since 1883.

The removal of the statue, which recalls Christopher Columbus’ request to the Spanish queen to finance his first trip, in which he would reach American lands, was announced on June 16 by the pro tempore president of the California Senate, Toni Atkins; Speaker of the California House of Representatives, Anthony Rendon; and the chair of the Assembly Rules Committee, Ken Cooley. All three politicians belong to the Democratic Party.

Members of the Democratic Party also pointed out in their June 16 statement that “Christopher Columbus is a deeply polarizing historical figure, given the deadly impact his arrival in this hemisphere had on indigenous populations. The continued presence of his statue on the California Capitol, where it has been since 1883, is completely out of place today. It will be removed.”

In a Twitter post sharing the statement, Anthony Rendon said, “The Columbus statue has no place in a modern California State Capitol. It is time for it to be removed.”

California Governor Gavin Newsom, also of the Democratic Party, said on July 7 that “we cannot correct the mistakes of our past, but we can recognize them and commit to building a more equitable future, fair to all. This retreat is symbolic, but an important recognition of that promise.”

The removal of the statue comes amid a wave of criticism of figures in United States history, accused of committing abuses against indigenous and African American populations. Among the most violent protests there have been repeated attacks and damage to images of San Junípero Serra, considered the Father and Apostle of California, canonized in 2015 by Pope Francis.

Isabel I of Castile, “la Católica”, reigned in Castile and Aragón in the 15th century, and sponsored the voyages of Christopher Columbus that marked the beginning of Iberian colonization in America. Her cause for canonization is open and is considered by the Church as “servant of God”.

The cause was opened in 1958 in the Archdiocese of Valladolid (Spain), where Elizabeth died, and the diocesan phase concluded in 1972, being sent to Rome for the consideration of the Congregation for the Causes of Saints.

In June 2018, the bishops of southern Spain decided to join the Spanish queen’s beatification cause as a plaintiff.

Serious historians have also debunked the black legend that Christopher Columbus abused and enslaved indigenous people upon arrival in America.

In 2017, Carol Delaney, author of “Columbus and the Search for Jerusalem” and professor emeritus at Stanford University, noted that the navigator’s critics “are blaming Columbus for things he did not do. Those who made them were the people who came after him, the colonizers. I think he has been terribly slandered.”

“The legacy and exploits of Christopher Columbus deserve to be celebrated. He was a man ahead of his time and an intrepid explorer and brilliant navigator whose daring discovery changed the course of history, “he said.

Delivering the statue donated by his brother, the millionaire Darius Ogden Mills, Edgar Mills, on Dec. 17, 1883, assured that “California, more than any other state in the American Union, fulfills the (Columbus) visions of lands wonderful beyond the rising sun.”

Ecuador: Protocol for the resumption of public Masses in Guayaquil approved

The Archdiocese of Guayaquil (Ecuador) announced the approval of the protocol for the resumption of public Masses in the city.

The Archdiocese announced today in a statement that the Cantonal Emergency Operations Committee (COE), the institution in charge of dealing with cases of emergencies and disasters in the city, approved on July 13 the update of the protocol for the resumption of public Masses.

After a long period of social isolation to avoid the expansion of COVID-19, the Government of Ecuador divided the cities according to the traffic light colors: red, yellow and green, to indicate the level of expansion of the virus and thus, be able to determine the measures to progressively resume economic and social activities in the country.

Since May 20, Guayaquil has been at a yellow traffic light and under a sectorization strategy in 17 areas and a communal control traffic light for homes, for which reason it was authorized to reopen the churches for personal worship and worship. Currently, the city is preparing to go to the green light, where it will be possible to celebrate public Masses and confessions.

The new protocol presents some measures that are added to those already approved by the local authorities, such as the celebration of “baptisms, marriages and funerals, with a time limit of 40 minutes.”

For example, churches that celebrate Holy Mass will have a capacity determined by the color of the traffic light; and the rooms where courses and group meetings are held will allow the entrance of a maximum of 25 people or the percentage of the capacity for that space according to the corresponding traffic light.

In the case of family catechesis, it was decided that it would continue to occur virtually. When the city is at a green light, it will be possible to carry out “catechesis for children and adolescents, as determined by the corresponding authority.”

In the statement, it was also highlighted that “the parishes have followed a strict control of the biosafety processes in order to be able to reopen, such as: the suppression of the use of holy water basins, the prohibition of approaching religious images, the omission of rite of Peace, communion in hand, disinfection of alms and the disposition not to distribute printed material ”.

In this sense, it was urged to continue caring for the community with “disinfection of hands and footwear, taking temperature at the entrance” of the temples, the use of masks and respect for social distancing “on a mandatory basis” and “remembering that the emergency is not over.”

As the Church in Guayaquil is “committed not only to the bodily well-being of citizens but also to their spiritual growth”, groups at risk of contagion of the virus who cannot attend churches will be able to continue participating in the live broadcasts of the Daily Holy Mass and the Blessing with the Blessed Sacrament, through Facebook and YouTube. 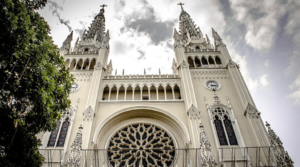