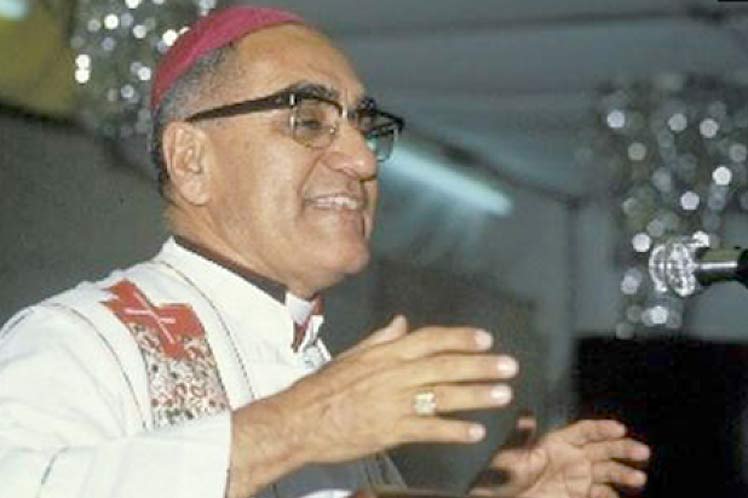 by the El Reportero’s wire services

San Salvador, March 24 – Salvadoreans are commemorating the assassination 40 years ago of Saint Oscar Arnulfo Romero, a crime that triggered a civil war and created a national symbol.

After being canonized in October 2018, Romero, who was known as the voice of those who do not have voice, is still awaiting earthly justice, as his assassins, hired by the oligarchy, remain unpunished.

New evidence was produced this year in the criminal investigation on the brains behind the crime, the perpetrators and their accomplices.

The annulment of the Amnesty Act eliminated all excuses to refuse to investigate the crime, in which Roberto d’Aubuisson, founder of the right-wing Arena party, was allegedly involved.

Monsignor Romero made categorical statements that cost him his life, but he won immortality in the hearts of Salvadorians.

Some of those statements are ‘truth is always persecuted’, ‘man is not worthy for what he has, but for what he is’ or ‘my voice will disappear, but my word that is Christ will remain in the hearts that have wanted to welcome him’.

Hondurans regret closure of markets due to SARS-CoV-2

March 24, 2020 – Hondurans being unemployed or with informal jobs regretted on Tuesday the closure of markets due to Covid-19 pandemic since they do not have where to purchase food.

According to ‘Radio Progreso de Honduras,’ some people assure that if ‘coronavirus do not kill them, starvation will do so.’

The authorities noted that products’ supply to the population is enabled by means of supermarkets, small markets and groceries as long as they present their safeguard.

The measure seeks to prevent crowds and contact among people, the first way of spreading the disease, which concerns the humblest sector of the population.

According to the National Institute of Statistics, 2,780,000 people are jobless and employed in precarious working conditions.

Former president Manuel Zelaya (2006-2009) assured on Twitter that direct economic transfers to a million of families, with a minimum month wage, the people could purchase food, water and medicines in a fast and crystal-clear way.

A pair of armored trucks transporting ingots of a gold/silver alloy were attacked and robbed by a commando of armed men in Caborca, Sonora, on Monday.

The precious metals for the ingots, called doré bars, had been extracted from the La Herradura mine, operated by the Canadian mining company Penmont.

The SEPSA security company trucks were intercepted by a convoy of at least 10 vehicles around 2:00 p.m. on Monday. The assailants blocked the highway with a truck to force the armored cars to stop.

The six SEPSA employees were assaulted by the thieves. One sustained minor wounds requiring hospitalization, while the others were treated by paramedics and released at the scene.

Penmont did not release the market value of the doré bars that were stolen.

It was not the first instance of highway robbery of precious metals mined by Penmont in the area. Thieves stole 47 doré bars in November of last year from another Penmont-owned mine.

The estimated 722 kilograms of doré stolen in November were from the Noche Buena mine, not far from La Herradura, and valued at around US $8 million according to the exchange rate and gold price at that time.

The open-pit La Herradura mine is in the Sonoran Desert about 20 kilometers east of the popular Gulf of California tourist destination Puerto Peñasco, Sonora.