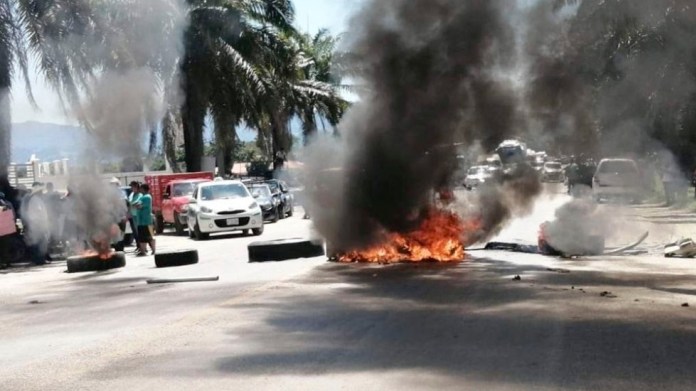 Residents of the municipality of Palenque, Chiapas, attacked and expelled Central American migrants who had been staying in the local auditorium for months.

Around noon on Monday, residents of the community of Pakal-Ná arrived at the auditorium and evicted the migrants who had taken refuge there with the approval of local authorities.

They said that robberies and assaults on women have increased since the migrants arrived and claimed to have identified the perpetrators among them.

Another group of citizens closed the highway connecting Pakal-Ná to the town of Palenque and the Palenque International Airport for three hours.

The Central American migrants fled the town and hid in abandoned houses on the outskirts, having nowhere else to sleep.

No injuries were reported during the eviction, but the Palak-Ná residents threatened to take further action to drive out the migrants should they attempt to reenter their community.

It was not the first time that Central American migrants had resorted to occupying abandoned houses in the face of having no other shelter.

Dozens of migrants forcibly entered and squatted in unoccupied houses in Tapachula, Chiapas, in December, forcing the owners to take legal action to compel authorities to remove them.

Panama, Mar 6 – The experience of Latin America and the Caribbean in the prevention of viruses and diseases such as measles and H1N1 is today the main strength in the fight against COVID-19, assured epidemiologist Jorge Victoria.

During his presentation at the health commission of the Latin American and Caribbean Parliament (PARLATINO), which is in session here, the coordinator of Disease Surveillance and Control of the Pan American Health Organization (PAHO), stressed that this work has allowed the region to strengthen its capacity for diagnosis and response to the new coronavirus.

He pointed out that in most cases the respiratory infection was not detected at airports despite controls, but in health institutions after the appearance of symptoms, which shows that a patient may be asymptomatic during the incubation period.

Victoria said that the number of cases in China has now decreased; however, there is an increase in contagion outside the Asian country, so she called to avoid the irresponsible dissemination, ‘sometimes even faster than COVID-19 itself,’ of alarmist or false news on social networks.

He also urged people to maintain vigilance and raise the level of alert to the presence of diseases such as diabetes, dengue, zika and heart conditions, among others, with higher mortality rates in the region.

Rolando González, deputy secretary of Parlatino Committees, and Luis Velasquez, president of the Health Commission of that legislative body, announced the approval this Friday of a regional resolution on the seriousness of this coronavirus, after its arrival in Brazil, Mexico, Ecuador, Chile, Argentina and the Dominican Republic.

Recently, Panamanian Health Minister Rosario Turner met with PAHO Deputy Director Jarbas Barbosa, who expressed his satisfaction with the way the Central American country is implementing the necessary measures to prepare itself to face COVID-19.

Turner, for his part, said that it is important for the international community to know that Panama is taking the corresponding measures, but its compliance is only possible thanks to the support of society, health workers and institutions.

March 8, 2020 by admin Comments are off 0 viewson Latin Briefs