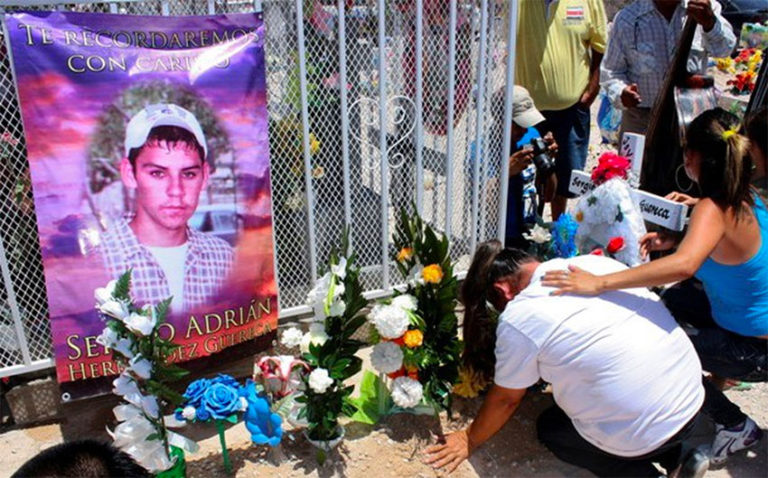 The federal government has expressed regret about a ruling by the United States Supreme Court that prevents the family of a teenage boy who was killed in Ciudad Juárez, Chihuahua, in 2010 from suing the U.S. border patrol agent who shot him.

In a statement issued by the Ministry of Foreign Affairs (SRE), the government said that it was deeply concerned about the effects that the February 25 ruling will have on similar cases in which Mexicans died on their side of the border after being shot by border patrol agents from the U.S. side.

“With this precedent, such cases could now face limitations in demanding justice and compensation in courts of that country,” the SRE statement said.

Sergio Adrián Hernández Güereca, 15, was shot in June 2010 by Jesús Mesa, a border patrol agent who was on duty in El Paso, Texas. Mesa was on a bicycle patrol when he was alerted to the presence of people smugglers, the BBC reported.

Hernández and a group of his friends were in the dried-up concrete bed of the Rio Grande at the time.

According to the youth’s family, Hernández and his friends were daring each other to run across the unmarked international border in the middle of the culvert built to contain the river, and touch a fence on the U.S. side.

Mesa detained one of the boys for illegally crossing the border but Hernández and another youth returned to the Mexican side and hid behind a pillar. The 15-year-old was shot twice as he peeked out from behind the pillar.

U.S. authorities ruled that the border agent had acted in self-defense even though they found no evidence that Hernández had thrown stones at him as he claimed.

Mexican authorities charged Mesa with murder but the United States refused to extradite him. Hernández’s parents subsequently attempted to sue the border agent in the United States for violating the U.S. Constitution by using excessive force.

Lower courts dismissed their claim before the case reached the U.S. Supreme Court on Tuesday. The justices divided five to four along conservative-liberal lines to uphold the lower courts’ decision.

The conservative justices argued that “a cross-border shooting is by definition an international incident” and therefore should be solved diplomatically rather than legally. Allowing the boy’s parents to pursue compensation in the United States would have implications on foreign relations and national security, they said.

Ruth Bader Ginsberg, one of the dissenting judges, said that the border agent’s “allegedly unwarranted deployment of deadly force occurred on United States soil” and that it did not make sense to dismiss the parents’ claim because the bullet ended up on the Mexican side of the border.

A lawyer for the family said that the ruling would “promote a Wild West attitude” on the U.S.-Mexico border.

“To be left with no remedy … given such a violent and unprovoked shooting, weakens the constitutional foundation of America’s house,” Robert Hilliard said.

In the SRE statement, the government said that it would continue to provide assistance to all Mexicans affected by cross-border incidents. It also noted that Mexico and the United States formed a border violence prevention group in 2014 that has met on six occasions and made progress on issues such as accountability and transparency.

President López Obrador announced his opposition to a proposal to reinstate the death penalty at his morning press conference on Wednesday.

“I don’t believe in the death penalty and I also don’t think it’s an option, an alternative,” he told reporters.

His declaration came in response to a proposal on Tuesday by federal deputies from the Green Party and his own Morena party to put up for discussion the amendment of four articles of the constitution, as well as the country’s withdrawal from two international treaties by which is it bound not to reinstate the punishment.

They proposed the death penalty for those found guilty of femicide and homicide of people under 18 years of age, saying that the measure would be temporary “until Mexico returns to times of peace and tranquility.”

Green Party national director Carlos Puente and the party’s parliamentary leader in the Chamber of Deputies, Arturo Escobar, also suggested that the Supreme Court be the entity to decide on the matter.

“We cannot, for the circumstances and crises which we’ve experienced in this country in recent years, establish this type of barbarous penalty,” he said.

The death penalty was abolished in Mexico in 1929 and the country signed the American Convention on Human Rights, also known as the “Pact of San José,” in 1969.

Article 4 of the treaty, which deals with the right to life, stipulates that “the death penalty shall not be reestablished in states that have abolished it.”