On a day like today Frida Kahlo is born 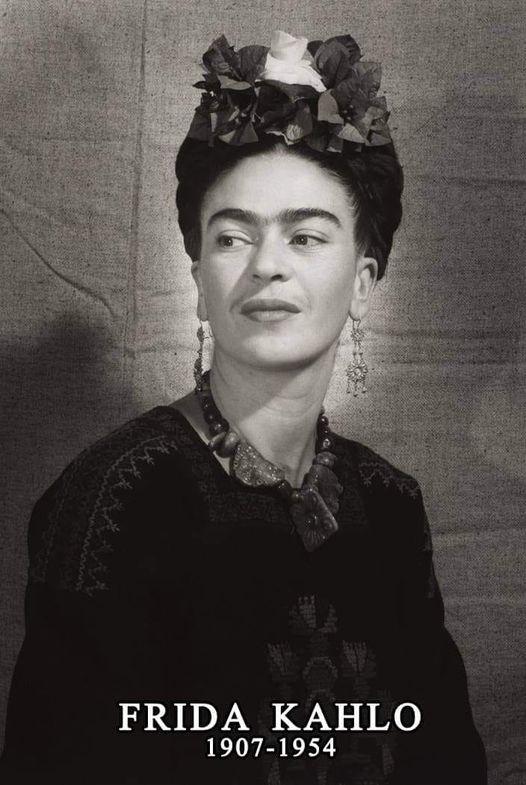 On a day like today, the Mexican painter, Frida Kahlo, author of the work “Las Dos Fridas”, daughter of photographer Guillermo Kahlo and wife of fellow painter Diego Rivera, was born.

They thought I was surreal, but I wasn’t. I never painted my dreams, I only painted my own reality.

Magdalena Carmen Frida Kahlo Calderón, was born on July 6, 1907 in Coyoacán, Mexico, daughter of photographer Guillermo Kahlo and Matilde Calderón, at the age of 6 she began to suffer from poliomyelitis, which left her bedridden for 9 months, leaving him one leg much thinner than the other, during his rehabilitation he practiced different sports.

After some time, he entered the National Preparatory School in Mexico City in 1922, where he was part of a group of students called “Los Cachuchas”, among them was Miguel Lira, writer and teacher, and Alejandro Gómez Arias, who came to Being Frida’s boyfriend, they protested against the reforms of the school system, in high school he met Diego Rivera while he was painting a mural in the auditorium, since Frida admired his work.

On September 17, 1925, when leaving school, she suffered an accident when the bus in which she was riding was run over, and it was smashed against a wall, Frida fractured almost her entire body, leaving her prostrate in bed, being thus He began his passion for painting and in 1926 he painted his first self-portrait, and the following year he painted “Los Cachuchas”, in a cubist style, then “Portrait of Miguel N. Lira” and that of his sister Cristina.

During her recovery, Frida began to enter into political circles, she became a member of the Communist Party and attended evenings, one of them in 1928, she met Diego Rivera again, and after making friends with him, she was constantly invited to the house. of the Kahlo family, they began a courtship, and on August 21, 1929 they got married, what some people called the union between an elephant and a dove, Diego, 43, and Frida, 22.
In May 1932, Frida becomes pregnant, but after three months she aborts because the fetus was misplaced, putting her life at risk, this led her to paint the work, “Abortion in Detroit”, three years later she discovers that her husband was unfaithful with his sister Cristina, which affected him a lot, although he already knew about other adventures of her husband; But after her, Frida, by way of revenge, begins a relationship with the Russian Leon Trotski, who was in exile in Mexico, which started an open relationship between her and her husband.

On September 15, 1932, her mother, Matilde, died, her relationship with her mother was never good, but with her father she always had a very strong connection. Her father suffered epileptic seizures and she Frida knew what to do when they occurred and she managed to calm them down, details a report in History.

Frida did not stop painting, adopting the surrealist style, in 1937 she painted the work “My nana and me”, a work that describes the relationship between Frida and her nana,
She fed me a babysitter whose breasts were washed every time I went to suck them.

In one of my paintings I am, with the face of a large woman and the body of a little girl, in the arms of my nanny, while the milk falls from her nipples like from the sky, says Frida in the book “Kahlo: Pain and Passion” by Andrea Ketterman .

In 1938 he painted Self-portrait with a bow tie, and that year, thanks to the poet André Bretón, he held his first exhibition in New York, the following year he finished his painting “Las Dos Fridas” and separated from Diego Rivera, but in 1940 as a result of the murder. de León, Frida is arrested but hours later she is released, then she travels to San Francisco for surgery, Diego was also there, and months later they decide to marry again. On April 14, 1941, her father, Guillermo de ella, died at the age of 69.

Frida she continued exhibiting her paintings in New York and Philadelphia, in 1943 she returned to Mexico where she dedicated herself to teaching at the “La Esmeralda” school.

In 1952 he met the Mexican comedian Mario Moreno “Cantinflas” (who was portrayed by Diego in 1957) and in 1953 an exhibition was held in Mexico City, but due to his poor health, he arrived in an ambulance at said exhibition. She was taken on a stretcher, and she was in the center of the gallery, leaving everyone surprised, as she always maintained her good humor, days later one of her legs was amputated due to gangrene, which left her in deep sadness.

Frida tried to commit suicide by ingesting opiates, but she never succeeded, since her love for Diego made her give up that idea; Her constant pains were ending her day by day, despite promising not to attempt suicide again, she was hospitalized twice, once in April and once in May.

On July 6, 1954, she turned 47 years old, she sang the mañanitas to her, and a great celebration was held, with more than 10,000 guests, in the next few days her health became more complicated and at 2:00 a.m. On July 13, she Frida began to complain of severe pain, the nurse applied a calming

July 6, 2021 by admin Comments are off 0 viewson Arts & Entertainment