A LESSON TO LEARN IN THE US: Through residents’ own initiative, Puebla town has its first doctor 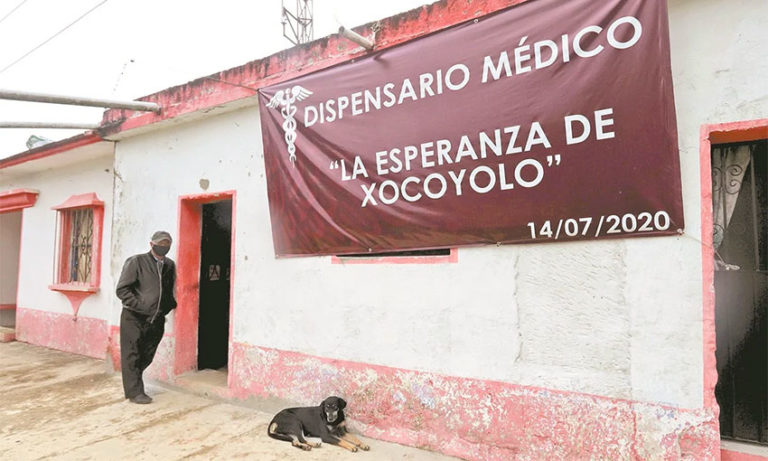 Thanks to the efforts and financial contributions of its residents, a town in northern Puebla has a medical doctor for the first time in its history.

Residents of Xocoyolo, located in the Sierra Norte municipality of Cuetzalan del Progreso, have been asking state and municipal authorities to set up a clinic and send a doctor to their town for years.

They even took their plea to President López Obrador, submitting a letter to him during a visit he made to the nearby municipality of Zacapoaxtla last October. But as had occurred before, their request fell on deaf ears.

In that context, members of the town’s political committee decided to take matters into their own hands to ensure that residents could access the health care they require.

Now, not only is there a new clinic in town, dubbed “the Hope of Xocoyolo,” but also a resident doctor – Coral Anais Medina, who arrived from Tamaulipas last month.

Araceli Cerqueda, a retired nurse who is now volunteering at the clinic, told the newspaper El Universal that due to the inaction of authorities, residents decided to turn part of a local government building into a clinic themselves.

She explained that almost everything in the clinic including “the bed and the desk” are on loan from local residents but will eventually have to be returned.

Cerqueda explained that residents agreed to pay 150 pesos (about US $7) per family per month in exchange for medical care and medications, “if we have them.”

Part of the money is used to pay the salary of the resident doctor and the remainder goes to the purchase of medical equipment, supplies and medicines, she said.

The retired nurse said that a clinic was badly needed in Xocoyolo because a large number of the indigenous Nahua residents have chronic diseases such as hypertension and diabetes.

“We went around the community to announce the clinic and we found out that there are at least 350 diabetics; there are even 20-year-old people with the disease,” Cerqueda said.

In addition to treating chronic diseases, Medina has also detected five probable cases of Covid-19 since the clinic opened in mid-July. Volunteer nurses told El Universal that the cases were treated in the community because there are no Covid hospitals nearby.

Until April, Xocoyolo residents with chronic diseases or other medical issues traveled to the towns of Cuetzalan or Zacapoaxtla to see a doctor but appointments have been suspended due to the pandemic.

As a result, people with diabetes and high blood pressure didn’t receive the treatment they needed until the new clinic opened, said Medina, the recently-arrived doctor.

“Something that we mustn’t forget is that [in addition to] Covid, there are other serious illnesses that require attention,” she said.

According to volunteer nurses, up to 16 people a day are now attending appointments at the Hope of Xocoyolo.

Despite families contributing to the purchase of supplies, there is a constant need for more, Cerqueda said, adding that the clinic also lacks equipment.

“It would help us a lot to have an examination table and an oxygen tank,” she said, explaining that the latter is needed because of the town’s distance from the closest hospitals.

Made in China is a more common label than Made in Mexico. Why?

This morning my 13-year-old, looking at something on Amazon, said, “Don’t buy that, it’s from China. They gave us the virus.”

I could have given her a lesson on free trade and comparative advantage. Instead my mind turned to a question that’s been bothering me for years — “Why not buy it from Mexico?”

– Mexico is right next door to the world’s biggest and richest market. China is thousands of miles away

So why is my classic “kitchen drawer from hell” filled with Made in China utensils and why is my closet bulging with Chinese-made clothing and shoes? And nothing from Mexico?

In recent years I’ve dined with a storied Mexican entrepreneur in Puebla, flown with an energetic Polish entrepreneur who was giving up and selling out and heading home to Warsaw from Yucatán, and worked with the sugar/ethanol industry in Guatemala, where the same issue is pertinent.

Here are their real-world answers to the “Why not” question.

– The Mexican entrepreneur, not a man of many words: “Inefficiency.”

– The Polish entrepreneur, wealthy from furniture exports from relatively treeless Poland to Sweden’s IKEA, only slightly more wordily: “The workers don’t show up.

– The Guatemalan sugar entrepreneur, responding in much greater detail to a question as to why he kept so many mechanical harvesters on hand when his cane was harvested by hand, said, “Mother’s Day, My Birthday, My Saint’s Day, My Village’s Patron Saint’s Day, Army Day, Christmas Week, Easter Week, Various Anniversaries of Various Revolutions, labor law-mandated two weeks’ vacation a year” and “sugar cane doesn’t reach an ideal harvest date according to a calendar. We have to be able to harvest it exactly when it’s brix-ready [a key measure of sweetness].” Then, a little more succinctly, he added, “Insurance.”

I don’t have the answer, but long before the latter real-world encounters the issue came to my fore in an academic setting. I took a grad school course in the economies of developing countries, and about the only thing I remember was called the “Backward Bending Supply Curve for Labor,” a name only an economist could love.

First documented in post-World War II West Africa, it described in economist-ese the situation on a West African coconut plantation where it was well documented that when workers had picked the number of coconuts on a given day to be paid “enough” for their needs, they simply put the machetes away and went home. Today there is no West African coconut industry to speak of.

I’m left unsatisfied at posing a question for which I have no answer. But surely it is the question for both the present and the future. On paper Mexican entrepreneurs should be lining up to replace Chinese exports to the vast U.S. market.

Carlisle Johnson writes from his home in Guatemala.

September 5, 2020 by admin Comments are off 0 viewson News