What do you know about how CIA propaganda works and gets into the media – worldwide which manages to shape public opinion? It is explained in the following article by investigative reporter James Corbett. – Marvin Ramírez.

If you haven’t watched my video yet, you should definitely do so. And then you should go read that New York Times article for yourself. (But read it at this link to avoid giving the Old Grey Presstitute your click.)

When you do read the article, you’ll see that it is an obvious limited hangout—that is, the deliberate revelation of some information in order to prevent the discovery of other, more important information. This observation tells us two things:

In order to understand the hangout the Times is attempting here, we first have to examine the article itself and the information that the article does contain. 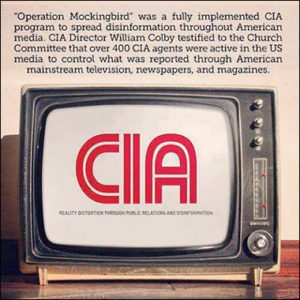 The report concerns the so-called “Mighty Wurlitzer,” the propaganda network of “800 news and public information organizations and individuals,” including “newspapers, news services, magazines, publishing houses, broadcasting stations and other entities” that the CIA either owned outright or exerted editorial control over.

That the article is indeed a limited hangout is evident right from the start. Within the first few paragraphs of this extensive investigation, the author is quick to reassure readers that the incredibly vast, incredibly powerful CIA propaganda network that he is documenting was never actually used to forward propaganda.

“Although the C.I.A. has employed dozens of American journalists working abroad, a three-month inquiry by a team of reporters and researchers for The New York Times has determined that, with a few notable exceptions, they were not used by the agency to further its world-wide propaganda campaign.”

This claim is not just disingenuous, it’s downright ridiculous. Indeed, the remainder of the article serves as one giant rebuke of that preposterous lie. But only a tiny percentage of the population makes it more than a few paragraphs into a story, so placing such a claim up front makes sure to placate the majority of readers and convince them that this propaganda network must not be so bad after all.

The report then goes on to detail a number of media entities that the CIA owned or controlled during the period in question (primarily the 1950s and ’60s), including:

Perhaps more important to the CIA than its control over these media organs, however, were the journalists and editors who were willing to aid the agency in publishing its propaganda. Some were on the CIA payroll directly, others worked on contract. Names dropped in the article range from the familiar—like Tom Braden and William F. Buckley, Jr.—to the long-forgotten. Readers are left with the impression that the agency’s propaganda efforts were (emphasis on past tense) more extensive and far-reaching than anyone had imagined to that point.

The article must have been a bombshell for the relatively information-deprived New York Times readers of 1977. Given how difficult it was to discover any reliable information about the CIA and its operations in that pre-internet era, finding such a treasure trove of information in no less a publication than the USA’s “newspaper of record” must have been incredible.

This, of course, poses the question: Why, then, was this article published? Surely the details of this report had been known to journalists for some time previously. So why was the Times publishing it at that precise moment?

To answer that, we have to look at the context of what was happening in 1977. The issue of the intelligence agencies and what they were really doing under the cover of national security had been blown wide open in the Church Committee hearings of 1975. The Committee, set up after a series of revelations about US military and intelligence agency abuses of Americans’ rights, released reports on a wide variety of issues that had hitherto been under wraps, from the existence and operations of the National Security Agency to the workings of covert assassination programs (including the infamous heart attack gun).

One of the issues to arise during the committee’s hearing was that of the intelligence agencies’ relationship with the media. One journalist who was working to document these ties was Carl Bernstein, who, in October of 1977, published his own report on the subject, “The CIA and the Media,” in Rolling Stone magazine. Bernstein’s extensive article revealed a number of long-suspected links between the agency and leading publishers, including the fact that Arthur Sulzberger Sr. (then publisher of The New York Times) worked hand-in-hand with the CIA.

I’ll allow you a moment to recover from your shock.

In fact, Bernstein not only identified Sulzberger (along with Henry Luce of Time Inc., William Paley of CBS and numerous other media moguls) as working directly with the CIA, but he revealed that there were ten CIA operatives working at the New York Times in the 50s and 60s alone.

Perhaps you’re starting to see why the Times was suddenly motivated to publish a report exposing the CIA’s “worldwide propaganda network,” but conveniently omitting its own role in that network. Neither will you be surprised to learn that the Times “forgot” to note the fact that its American media brethren (Time, CBS, NBC, Reuters, Hearst Newspapers, The Saturday Evening Post, Newsweek and many others) were named by Bernstein as “organizations which cooperated with the CIA.”

In fact, the Times article goes out of its way to stress that the “Mighty Wurlitzer” was only directed abroad, not at the American public. In a section with the prominent subhead “Agency Charter Bars Propaganda in U.S.” (emphasized in italics and bold, unlike any of the article’s other sections), the report is at pains to stress that the CIA has been legislatively prohibited from propagandizing American citizens directly. It then presents a limited hangout argument that some of the agency’s foreign propaganda may have been “accidentally” relayed back to American media by “unwitting” correspondents abroad, thus propagandizing the American public (which totally wasn’t the CIA’s intention, guys!).

As Bernstein had already shown, however, the agency was actively involved with spreading propaganda to the American public via American media organs like the New York Times. For some reason, this fact was left out of the Times‘ report.

In the end, the entire Times article serves as a case study in the art of the limited hangout. It shows us exactly how and why these types of “bombshell revelations” are dropped on the public in the pages of mainstream publications. These revelations—containing true and verifiable information, including information of real importance—can help to obscure other, more embarrassing facts and shift the public debate from matters of vital importance to peripheral issues.

To be sure, the article is still worth reading. It does contain true and verifiable information about the CIA’s propaganda activities. But, like all such limited hangouts, it can only be properly understood when one understands what has been left out of the story.

The propagandists never do make it easy to get to the bottom of their lies, do they?

February 10, 2020 by admin Comments are off 0 viewson Editorial