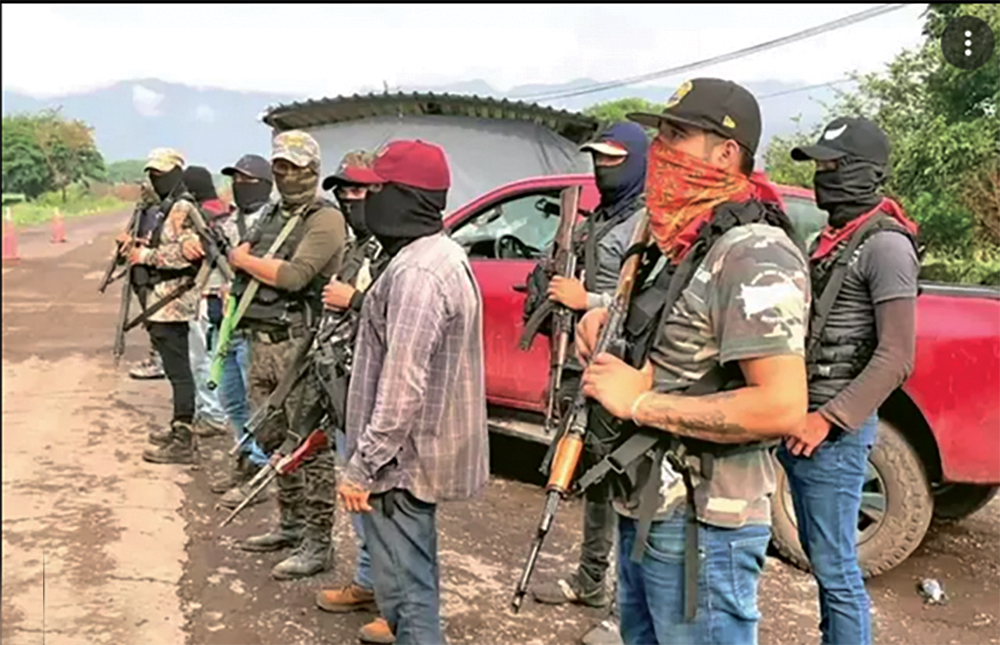 ‘It’s cheaper to buy a rifle than to pay extortion’

Fed up with being besieged by criminal organizations, avocado and blackberry producers in Michoacán formed their own armed group that is successfully keeping cartel members out of four municipalities.

Some 3,000 farmers and farmhands from Salvador Escalante, Ario de Rosales, Nuevo Urecho and Taretán have taken up arms over the past eight months to defend themselves and their land from attacks by criminal organizations. A spate of kidnappings in the area and frequent demands for extortion money motivated them to act.

Now, according to a report by the newspaper Milenio, an armed private security force — “a parallel authority” — operates in the four neighboring municipalities, located approximately 100 kilometers southwest of Morelia.

“With high-powered weapons, they have shut off access to their communities for drug traffickers and hitmen, choosing who comes in and who doesn’t,” the report said.

Although the armed group — called Pueblos Unidos, or United Towns — has similarities to self-defense groups that have emerged in Michoacán and some other parts of Mexico in recent years, its members reject the autodefensas tag.

“We want to be very emphatic: we’re not autodefensas; we’re not a criminal group. Here in our lives, the only things we knew how to use were machetes. … Recently there has been the need to purchase some weapons, even though we’re afraid of not knowing how to use them correctly,” one of the men told Milenio.

The Jalisco New Generation Cartel (CJNG) and Los Viagras posed the main threat as both criminal groups have sought to establish themselves in the region in recent years and have engaged in a turf war with each other.

But with their 54 roadblocks across all four municipalities the avocado and blackberry producers have kept the criminal groups out. One roadblock on the road to La Huacana, a municipality controlled by the CJNG that neighbors Ario and Nuevo Urecho to the south, is manned night and day by up to 150 heavily armed men.

Among the Pueblos Unidos members are men who have been hired by avocado producers to bolster the ranks of the fledgling security force.

“It’s cheaper to buy a rifle than to pay extortion,” one member said, referring to payments demanded of avocado producers by criminal groups, including Los Viagaras, whose members were reportedly asking for a 50,000-peso (about US $2,500) per hectare “protection” fee.

In the eight months that it has been protecting the four Michoacán municipalities, the Pueblos Unidos group has achieved good results, members say. It has driven criminals out of the area, and homicides, kidnappings and extortion have all declined.

One commander of the armed group told Milenio that there is no longer any trace of Los Viagras in Los Ates, a community in Ario.

“We had to follow them [the criminals] wherever they were. We combed the hills, walking — something that the government hasn’t done. We came together in groups of 20 to 60 to comb the hills, and we frightened them away,” he said.

The commander said that he and the other members of Pueblos Unidos don’t want to live “on the margin of the law” but have no choice due to authorities’ inaction. If municipal, state and federal forces were able to guarantee their security, the farmers would return to full-time work on their land, he said.

If the authorities don’t do that, he said, the avocado and blackberry producers should be allowed to set up their own government in the region and be given permission to legally bear arms, as has occurred in some other parts of Michoacán.

“They should give us permission to defend ourselves,” the commander said. “We also don’t want to be disarmed, and we want to be respected. … They should do the work we’re doing, and maybe we’ll withdraw.”

President López Obrador on Friday made his views clear about the formation of the armed group.

“My opinion is that … autodefensas shouldn’t exist, because the responsibility for security corresponds to the state. I’m not in favor of people arming themselves and forming groups to confront crime because that doesn’t yield results,” he said at his regular news conference.

The president also said that self-defense groups are used to hide or shelter criminals. He said “they disguise themselves as people fed up with violence.”

He called on Pueblo Unidos to trust authorities, including official security forces, claiming that they no longer collude with criminals, as occurred during past governments.

However, the federal government, which officially inaugurated a new security force — the National Guard — in 2019, was unable to reduce Mexico’s high levels of violent crime in its first two years in office, with homicide numbers reaching an all-time high of more than 34,000 in 2019 and decreasing just 0.4% last year.

López Obrador asserted Friday that his administration is now making progress in the fight against violence, a claim supported to some extent by data that shows that homicides fell 2.9% in the first five months of 2021.

“We’re advancing little by little but we’re making progress,” he said before acknowledging that the security situation had “broken down a lot.”

With reports from Milenio

August 20, 2021 by admin Comments are off 0 viewson Frontpage