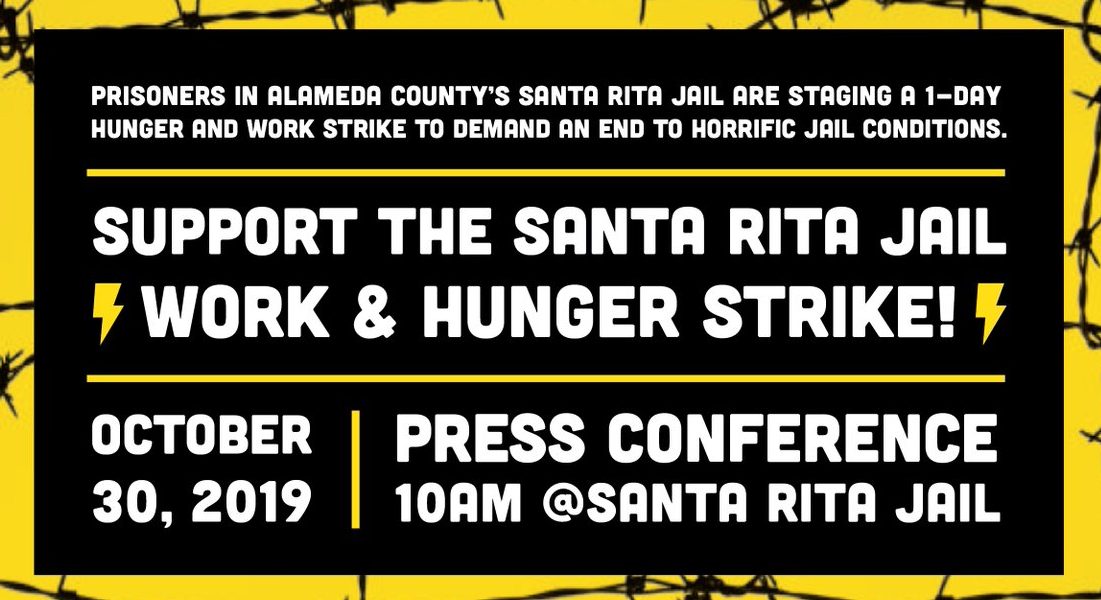 A hunger strike and work stoppage which began on Wednesday, October 30 inside Santa Rita Jail has continued through Friday, November 1. Since Wednesday, the number of individuals refusing to report to work assignments, meals, and jail programs has grown to over 300, according to attorney Yolanda Huang. All kitchen workers are on strike, she says, prompting threats from Santa Rita staff who claim that no one will receive food if the strike continues.

Santa Rita depends on unpaid labor from inmates to produce 16,000 meals a day for its own operations, as well as for other jails across the Bay Area. Huang reports that women inmates are now being forced to work in the kitchen, despite the fact that many do not have medical clearance to handle food. This will only exacerbate the public health issues which prompted the strike in the first place, she argues. Detainees report that they are served food that is spoiled and nutritionally poor. Poor sanitation and lack of access to cleaning supplies has led to “swarms of gnats” in communal areas.

The jailwide strike originated in Housing Unit 31, where a man died on Saturday, October 26. While the jail claims that the man died in booking, detainees allege that the man was in serious medical distress that remained unaddressed by guards until the man stopped breathing. Detainees who called for help were moved to the yard “so that there would be no witnesses,” says Huang. The attitude of guards inside Santa Rita is that “if you are in pain, if you are suffering, then you are a criminal and you deserve it,” she says. Nine people have died in Santa Rita custody in 2019 already.

The Audit Ahern Coalition is calling for a complete audit of the Alameda County Sheriff’s budget and administration of Santa Rita Jail. In addition, Attorney Yolanda Huang argues that supervisors should hold a public forum with Sheriff Ahern and conduct an independent investigation into conditions inside the jail. Advocates are calling on the community to contact the Sheriff’s Office and the Alameda County Board of Supervisors to ask that detainees not be punished for engaging in the strike.

Demands of the strike include: